UFI welcomes Author Eyal Kless. Thanks for Joining us!!

I love whisky
I hate shaving
I wish I had time for a dog
I love whisky (yea, that much!)
Stage anxiety has always been a struggle for me, even though I managed to overcome it on a regular basis, but it is still there
I get too impatient with people sometimes

I am a classical concert violinist, full time teacher, part time parent and an author… now about that down time… 😊 but on those rare occasions: I do try to train in MMA martial arts at least once a week and I do love video games and to keep up with world politics.

That’s a hard one, because each part of writing is a different challenge that can be enjoyable. I think editing contents together with the chief editors of Harper Voyager US and UK was the most interesting two months of my writing career. Until that moment I wrote more or less instinctively and suddenly I received four or five remarks per page on a 400+ pages novel (which subsequently ended up to be 500+ pages novel). It was a masterclass in writing and a very interesting experience. It definitely made me a better writer.

I also love writing sharp and funny dialogues, witty remarks or pretty much anything that would make the reader smile or laugh.

Many authors I know and respect have a methodology for writing, I (still) don’t. I try to write enough every week but it really depends on schedule and deadlines. It took me 20 years (yes…) to complete The Lost Puzzler (the novel survived allocation to at least 7 computers and four countries), and 10 months to complete the first draft to the sequel, Puzzler’s war, so I guess I am getting better.

Well, I want to use this opportunity to recommend two writers, one an Israeli expat, Lavie Tidhar, who was born and raised in Israel but lived all over the world (a very Israeli thing to do…). He has won numerous prestigious awards for his books, including world fantasy award for best novel 2012 (Osama). Central Station is perhaps the most Scifi of his books but all of his stories deal with speculative fiction and he is unafraid of touchy subjects. The second author is Clayton Taylor Woods, who self-publish his novels (I think he has 7 out by now) but has a strong, genuine voice and fabulous world building.

How would you pitch the Tarakan Chronicles to someone who has not heard of it before?

In one sentence: In a futuristic world that had plunged back to the dark ages, a young boy is gifted with only one special power: he can solve puzzles, but with that special power he changes the world. twice.

Can you tell us a little bit about the world that The Lost Puzzler is set in?

It is a futuristic world that had suffered from a great catastrophe that had plunged it back to the dark ages. High technology still exists but the knowledge of how to produce it is lost. The only way to get your hands on modern weaponry, medicine and energy clips is to raid the still functioning emergency bunkers of the alien cities of Tarakan, a mysterious race that had perished in the Catastrophe.

Do you have a favorite scene in The Lost Puzzler?

Everyone who had read the Lost Puzzler talks about the Tarakan Highway chase scene between a weaponless SuperTruck and five pirate Sharks. The action there is very cinematic and was a lot of fun to write. My own favorite scene is a faceoff between Galinak, one of the main characters, and an angry Troll in Margat’s Den, the city’s toughest tavern. The Audio book gives Galinak a rough Scottish accent which is exactly how I imagined him (and I had no connection with the Audio Book artists).

All the scenes in which Galinak appears in had me smiling when I was writing them. He is simply a likable character with plenty of rough and ready one liners which still cracks me up.
The hardest scene to write was when Rafik’s father discovers that the cursed tattoos appeared on his son’s fingers, marking him as a Puzzler. What would I have done if my child would have contracted a curse that would put the entire family in jeopardy? I am a father myself and the scene was very difficult for me to write.

I am working at the moment on the Sequel to the lost Puzzler, Puzzler’s war. The second book will give a satisfactory conclusion to the mysteries and storyline but maybe there would be a room for another story of the chronicles. I guess it depends on the reaction of the readers…
In the meantime, I have several other ideas, a fantasy story about music and Bard’s Magic which is very close to my heart since I have been writing it off and on for even longer than The Lost Puzzler. I have been toying with a story about a goblin private detective named Grooch, teaming up with a pacifist fallen paladin, a cigar smoking good for nothing imp and an assassin weresheep…

Eyal Kless is a classical violinist who enjoys an international career both as a performer and a teacher. Born in Israel, Eyal has travelled the world extensively, living several years in Dublin, London, Manchester, and Vienna, before returning to Tel Aviv. His first novel, Rocca's Violin, was published in Hebrew in 2008 by Korim Publishers. Eyal currently teaches violin in the Buchmann-Mehta School of Music at Tel Aviv University, and performs with the Israel Haydn String Quartet, which he founded. 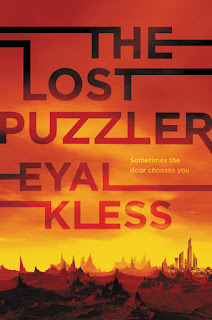 
A brilliantly written, page-turning, post-dystopian debut from Eyal Kless, about a society hoping to salvage the technology of a lost generation, a mysterious missing boy who can open doors no one else can, and a scribe who must piece together the past to determine humanity’s future.

More than a hundred years have passed since the Catastrophe brought humanity to the brink of extinction. Those who survived are changed. The Wildeners have reverted to the old ways—but with new Gods—while others place their faith in the technology that once powered their lost civilization.

In the mysterious City of Towers, the center of the destroyed Tarakan empire, a lowly scribe of the Guild of Historians is charged with a dangerous assignment. He must venture into the wilds beyond the glass and steel towers to discover the fate of a child who mysteriously disappeared more than a decade before. Born of a rare breed of marked people, the child, Rafik—known as “The Key”—was one of a special few with the power to restore this lost civilization to glory once again.

In a world riven by fear and violence, where tattooed mutants, manic truckers, warring guilds and greedy mercenaries battle for survival, this one boy may have singlehandedly destroyed humanity’s only chance for salvation—unless the scribe can figure out what happened to him.