Interview: In a Fix by Linda Grimes

UFI welcomes Linda Grimes Author of In A Fix. Thanks for Joining us!!

Hmm…well, I'm a pretty good shot with a .38 revolver. My husband took me to a shooting range when I was doing some research for a book, and I was frankly rather surprised at how I took to it. That's probably not generally known about me.

Hahahaha! Down time? What's that?

Nah, actually I love watching good TV shows with my husband. We like to wait until an interesting-sounding show comes out on DVD, and plow through a whole season (or more) commercial-free. Over the summer we went through six seasons of Supernatural, and the only two seasons of a quirky detective show called Life. Both were excellent, and a great way to wind my brain down when I just had to have a break from writing.

Being the boss. *grin* I get to write the stories I want, and make the characters do what I want them to. Er, not that I'm a power-hungry control freak or anything…

Seriously, it is fun to imagine whatever you like—to play in your own head—and then bring it to life on the page. I think everyone should try it.

Obsessively, you mean? Not really. I do like to check out my social media spots—Facebook, Twitter, GoodReads, blogs, etc.—while I'm having my tea in the morning. That gives my brain a chance to wake up before I dive into whatever I'm writing or editing.

I love Vicki Pettersson's Signs of the Zodiac series, and now her new Celestial Blues series looks like it's going to be excellent, too, if the first book in it (The Taken). Charlaine Harris's Sookie Stackhouse books are particular favorites of mine. Oh, and Jeanine Frost's Night Huntress series, too—Bones is yummy!

How would you pitch In a Fix to someone who has not heard of it before?

I'd tell them to picture a kind of human chameleon who will go in and fix your problems for you—as you—while you take a nice vacation from your harried life. That's Ciel Halligan, aura adaptor extraordinaire. Now, if only she were as good at fixing her own problems…

Can you tell us a little bit about the world that In a Fix is set in?

Just take a look around you. In a Fix is set in our world. The only difference is that it contains some people who have a genetic quirk that allows them to look like whoever they want. If there are any other anomalies in Ciel's world, I haven't run across them yet. But who knows what the future might hold?

Do you have a favorite scene in In a Fix?

Gosh, I like so many of them—it's hard to pick a favorite. I'm rather fond of the opening. What's not to like about drinking champagne while watching a half-naked man on the beach?

Other than Ciel, who is necessarily in all the scenes (the story being told from her point of view), I have a blast with Billy. Charming con man types are always fun. Mark (the CIA agent Ciel has been crushing on for years) is tougher sometimes, because he likes to play things closer to the vest. Takes a little pressure to get him to open up.

How many books are planned for the In a Fix series?

That's hard to say. Quick Fix will be coming out next July, and I've started work on Book 3, but who knows after that? I certainly have a ton of ideas about where the series could go, but I suppose it depends on how readers take to Ciel and the guys.

Well, eventually I'd like to polish up a supernatural suspense novel that currently resides in my desk drawer, and see if maybe that can find a place out in the world. Working on it gives me something to do when I'm not playing with Ciel and the boys.

Linda Grimes grew up in Texas, where she rode horses, embarrassed herself onstage a lot, and taught high school English to students who were more interested in heckling her at the theater where she moonlighted than in learning to conjugate verbs. Somewhere after horses and before teaching, she spent a semester abroad at Stockholm University, where she picked up enough of the native language to become linguistically entertaining. At least, her Swedish teacher seemed entertained when Linda, while attempting to relate, in Swedish, how her aunt had laughed at her, instead claimed her aunt had peed on her. (In Linda's defense, you'd be surprised at how similar "laughed at" and "peed on" sound in Swedish, at least to American ears.)

Linda currently resides in northern Virginia with her theater-god husband, who succumbed to her charms after seeing her in a musical number at the now defunct Melodrama Theater in San Antonio. (There's nothing like a rousing chorus of "If You Wanna Catch a Fish You Gotta Wiggle Your Bait" to hook a man for a lifetime.) They managed to spawn two brilliant and gorgeous children—a daughter and a son—both possessed of such generosity of spirit they will no doubt fight over who gets to support their parents when the time comes.

Like her globetrotting main character, Linda has spent her share of time overseas, where, among other things, she witnessed—up close and personal—a police takedown of purse snatcher in Paris, became a bit too acquainted with a gun-running couple in Ireland (through a misunderstanding while breaking into the ruins of a castle closed for the season), and almost froze to death in an ice cave in Switzerland. She has since decided that writing is slightly less hazardous than travel, and tends to stay firmly planted behind her keyboard, torturing her characters instead.
__________________________________ 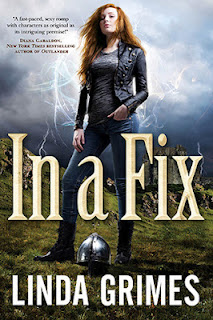 
Snagging a marriage proposal for her client while on an all-expenses-paid vacation should be a simple job for Ciel Halligan, aura adaptor extraordinaire. A kind of human chameleon, she’s able to take on her clients’ appearances and slip seamlessly into their lives, solving any sticky problems they don’t want to deal with themselves. No fuss, no muss. Big paycheck.

This particular assignment is pretty enjoyable... that is, until Ciel’s island resort bungalow is blown to smithereens and her client’s about-to-be-fiancé is snatched by modern-day Vikings. For some reason, Ciel begins to suspect that getting the ring is going to be a tad more difficult than originally anticipated.

Going from romance to rescue requires some serious gear-shifting, as well as a little backup. Her best friend, Billy, and Mark, the CIA agent she’s been crushing on for years—both skilled adaptors—step in to help, but their priority is, annoyingly, keeping her safe. Before long, Ciel is dedicating more energy to escaping their watchful eyes than she is to saving her client’s intended.

Suddenly, facing down a horde of Vikings feels like the least of her problems.