Review: Forsaken by the Others by Jess Haines 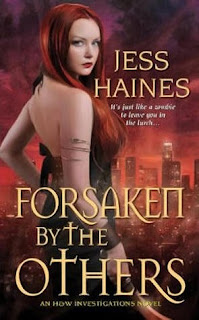 The Others–vampires, werewolves, things that go chomp in the night–don’t just live in nightmares anymore. They’ve joined with he mortal world. And for private investigator Shiarra Waynest, that means mayhem…

Have a one night stand with a vampire, and you can end up paying for it for eternity. P.I. Shiarra Waynest, an expert on the Others, knows that better than most. Yet here she is, waking up beside charismatic vamp Alec Royce with an aching head…and neck. Luckily, Shia has the perfect excuse for getting out of town–namely, a couple of irate East Coast werewolf packs who’d like to turn her into a chew toy.

On Royce’s suggestion, Shia temporarily relocates to Los Angeles. But something is rotten–literally–in the state of California, where local vampires are being attacked by zombies. Who could be powerful enough to control them–and reckless enough to target the immortal? Following the trail will lead Shia to a terrifying truth, and to an ancient enemy with a personal grudge…

With all the danger focused on Shia, Royce sends her and Sara off to California to what he thinks is safety to investigate a slight zombie problem. Unfortunately what they think they are walking into turns out to be much more dangerous than they thought.

I didn't feel that there was as much action as I have grown to expect. There were a few sticky situations but the book as a whole felt more like a filler/lead up to book 6 type book to me. I was disappointed with the lack of Royce time. They finally get together and they are separated? Sigh ... and what was up with him not trying harder to bring her back? Just didn't feel like the Royce I have come to know. Arnold is missing as well. With his and Sara's relationship so strong it just felt odd. I missed the other characters and settings I have grown to love about the series as well. The zombies were fun and we meet some interesting people, old and new. The cliffhanger ending definitely makes you want to read what will come next.

I hate to say it because I love Jess Haines and the H&W Investigations books but FORSAKEN BY THE OTHERS was my least favorite of the series. I will still be looking forward to book 6 so bring it on Jess.