UFI welcomes Author Vicki Stiefel. Thanks for Joining us!!

I was the first person in my extended family to get a tattoo. I now have seven—I get them because I love them and also for each book published. The tattoo on my hand—my most popular—is often remarked upon by strangers. love it, but who knew others would? 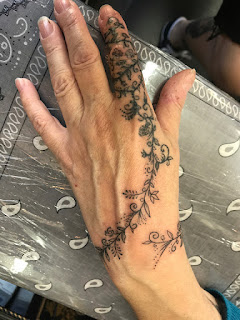 Climbing mountain peaks and soaring in hang gliders. In my dreams. Rather, I read, play with my pup, knit, fly fish, drink wine while watching Stranger Things, and occasionally scuba dive (this one’s real). 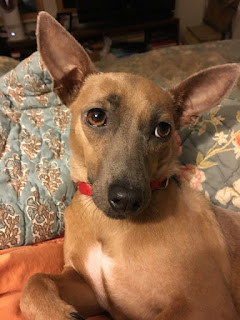 I love to edit because because the words I need to massage and refine are already on the page. All of which is easier than creating words from thin air. And yet, if truth be told, my favorite part of writing is my first draft. Why? Because I get to meet new people and explore new worlds, even if that sometimes feels harder than lifting the Titanic from the ocean floor. Yup, first drafts are both terrifying and thrilling. And who doesn’t want to be terrified and thrilled?

I write every day. Even if the writing’s lousy. Even if I stumble over every other word. Even if it’s frustrating as hell. Because just like with tennis or skiing or golf, muscle memory comes into play. The routine keeps me writing-fit. And, yes, the discipline works, even if occasionally I have to toss a bunch of words away.

Number one fave is Grace Draven’s Radiance. I love all her writing, in fact. I also love books by Ilona Andrews, Amy Harmon, Thea Harrison, Patricia Briggs, Jeaniene Frost, and many others. Add to the pile Nalini Singh, Anne McCaffrey, and many more.

How would you pitch ALTERED to someone who has not heard of it before?

Mashup Pitch: ALTERED is a combination of Nalini Singh’s Psy/Changeling series (for the romance and symbiont animal/human relationships) and Anne McCaffrey’s Pern/Dragon series (mistrals fly, though they don’t breathe fire), with a healthy dose of Outlander travel (parallel world travel) and romance (Rafe and Kit sizzle).

Can you tell us a little bit about the world that ALTERED is set in?

Eleutia is Earth, but not. Rather it’s a parallel world unknown to Earthly humans. Though much is similar to our Earth—weather, topography, etc.—humans, creatures, and lifestyles on Eleutia evolved very differently. Clans exist throughout the world, ones that are human, but with their respective animal counterparts or symbionts.

Scientists (Alchemics) control Eleutia, but that control is near invisible unless someone steps out of line. So laseblasters, hovercraft and other high tech gear exist, but so do flying horses (mistrals), a Clan of cast outs, and semi-human goddarts with delay arrows within a society that’s primarily agrarian/trade. Only the Alchemics are allowed to invent technology, and they parse it out in small doses, while they forbid the use of any but Small Magics.

But darkness is slowly blanketing Eleutia—but 20 percent of all births are female—the human species on Eleutia dying out.

Do you have a favorite scene in ALTERED?

Gosh, I have so many favorites, but if I have to pick, I’d say the climax. Kit chooses, and I’m hoping Kitlyn’s choice pleases, surprises, and thrills readers.

I’ve got seven other novels. As I write a novel, their characters are my favorites. But looking back, I’d say Kitlyn because of her circus days and her premise—how does a middle-aged woman react to being in her own new and younger body? Kit’s pretty together, but she’s also a stranger in a strange land. Kit challenged me in many ways, and the more complex she became, the more I loved her.

Rafe, Kit’s love in Altered. I’m always most comfortable writing brooding, isolated, and tortured heroes. While Rafe has his problems, he’s a man who fits his life and is comfortable with it. He’s a good guy, and the test for me was making him as fascinating as my broody-moody heroes. I figure readers will tell me if I’ve succeeded.

Many! I’m currently writing Changed, the second book in the Made Ones Saga. I’ve said it will be out in 2020, but if I get it done sooner… I’m also mind-mapping the third book in the series, as well as writing a novella for the saga. Last, but definitely not least, I’m working on Chest of Fire, the fourth book in my Afterworld Chronicles. 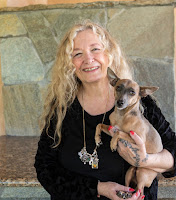 Vicki's fantasy romantic suspense series, The Afterworld Chronicles, launched with Chest of Bone, followed by Chest of Stone and Chest of Time. She is currently pounding the keys on her series' fourth novel, Chest of Fire, and the first in a new series, The Made Ones Sags: Altered.
Her mystery/thrillers include Body Parts, The Dead Stone, The Bone Man, and The Grief Shop, a Daphne du Maurier prize winner. All feature homicide counselor Tally Whyte. All are available as ebooks.
She co-wrote (with Lisa Souza) and photographed the 10 Secrets of the LaidBack Knitters. With her late husband, William G. Tapply, she ran The Writers Studio workshops in creative fiction.
Vicki taught fiction writing and modern media writing at Clark University.
She loves both a well-crafted sentence and unlocking the doors of a student's imagination.
She grew up in professional theater and planned to become an actress, with a bent for song and dance. She didn't. Instead, she's been a professional photographer, a high-school teacher, a hamburger slinger, a scuba-shop manager, and an editor.
She's Blake's and Ben's mom, her favorite role of all.
Her passions include scuba diving and fly fishing and knitting; photography and movies; vinho verde and bourbon (not together!); Maine lobster and chocolate (also not together!); and musical comedy scores, which she sing in the shower, unfortunately not an Equity venue; and a fascination with people in all walks of life. . 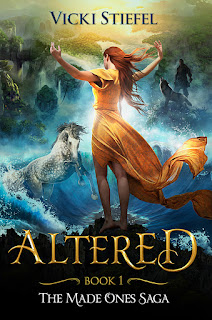 Altered
The Made Ones Saga #1

The Eleutians are dying out, one female at a time. To save their species, the powerful Alchemic Clan conscripts women from parallel worlds, altering them into the perfect breeding stock.

Kitlyn, a retired circus equestrian broken in both body and spirit, awakens on a strange world in her own much-younger body. She has been transformed into a Made One, but the gift of youth and the promise of a new life come at a terrible price.

Rafe, the Wolf Clan’s warrior champion, vows to find the cause of the species’ decline. He’s certain the Alchemics’ bid to save the Eleutians is but a thin veneer masking a dark purpose.

That vow becomes hard to keep with the threat of an inter-clan conflict and the arrival of the proud Made One named Kitlyn.

To save herself and those like her, Kit must carve a dangerous path in this new reality and make a choice that may cost her her freedom, her life, and the life of the Eleutian warrior she’s come to love.