UFI welcomes Author Lisa Casian. Thanks for Joining us!!

This or That
Character: Cassian de la Rue

Angels or Demons – Demons. I do like competition. And they're just more interesting to have a conversation with.

Vampires or Shifters –Well, since I'm a vampire…

Left or Right –Left. Rights are too boring.

Up or Down –Down. I've been to Hades and will be going back very soon.

Coke or Pepsi –Pepsi. Just because.

YA or Adult –Adult. Kids are so…dramatic. But don't tell that to my niece. I have to live with her.

Reading or Writing --Reading. Writing requires a pointy instrument that looks good enough to jab into someone, reminding me of blood.

Lisa Casian is the author of Bloodrose and the sequel Blood Bond, published by Breathless Press.
Lisa completed a Bachelors degree in Psychology with a minor in Criminal Justice at Northeastern Illinois University, and works in the community strengthening families. She spends her spare time reading and writing great romance with tough heroines and bad-boy heroes. 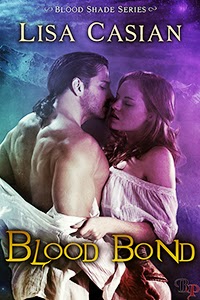 
Centuries ago, Cassian formed a bond with the goddess of chaos and stripped all that made him human, releasing the evil inside him. He became a Shade, leader of the shadow army. But Cassian could never allow the evil to fully entrench his heart.


Anna is running away from her life and her father. Switching places with her maid, she accepts a job as a healer, unaware that the job would require much more—her body and her heart. She gives both willingly to Cassian.


When Bowen pleads for Cassian's help in saving his own beloved from Eris, Cassian must fulfill his duty as a Shade and submit to Eris in order to save her. But it requires releasing Nyx out of Hades, along with a shadow army to rule over the humans. And with Anna's life at stake, Cassian has much more to lose than just his soul.


Only working together with his brother will allow them to save those they love and, hopefully, the world. If they don't kill each other first.

Cassian pulled away, releasing her lips from his, but remained close enough to feel the heat of her breath on his face. Her scent a mask he wore over his heart. He wanted to tell her to be afraid of him, of Bowen, even of Bas. To stop risking her life for them. But all that came out was, "Drop the visual of him and think of me."

She smiled, a hint of blush on her cheeks, as he felt a fool. Grateful that they stopped, he stepped out of the carriage and into the night.

The ship bobbled in the still, calm waters. The sails fluttered as the men began preparing the voyage. But Cassian didn't pay much attention to that. What he did see was a tall woman with flowing red hair waiting for them on the deck. Anna let out a groan.

Versandi smiled a brilliant smile at Cassian, and Bowen laughed beside him. "She is something, isn't she?"

"She's not here for me, dumbass," Cassian scolded.

"Isabeau wants you to feed." Cassian turned to look at his brother. "And if you ever, ever, lay your hands on Anna again, I will kill you."

Bowen narrowed his gaze. Cassian was glad Anna had already boarded with Samir so she wouldn't feel guilty of the threat. Bowen seemed to recover, and a smile spread on his face, though his eyes were hollow. "You better keep her close then." He tapped his forehead and climbed on board.
__________________________________