UFI welcomes Author Alex Bledsoe. Thanks for Joining us!!

PUTTING THE VILLAIN AT THE FRONT
by Alex Bledsoe

There's a maxim that the best villains are those that are seldom seen. Dracula, after the first few chapters, isn't really in the novel Dracula very much. He's talked about, pursued, analyzed and strategized against, but he doesn't show up. Hannibal Lecter isn't in Silence of the Lambs, novel or film, very much at all. Voldemort doesn't physically appear until the fourth Harry Potter novel. Hell, the hunter who kills Bambi's mother--voted the greatest screen villain of all time in an AFI poll--is never even shown.

But then, you have Richard III. Shakespeare's greatest villain is also the play's protagonist. He tells the audience exactly what he's going to do (i.e., "I'll have her. But I will not keep her long."), then does it. We understand exactly why he does what he does, and even if we don't approve, we nevertheless find ourselves hoping he succeeds, because he's made us accessories, complicit partners in his crimes.

When I started writing Long Black Curl, it was the third novel in my Tufa series. I'd already written five Eddie LaCrosse novels, more traditional mysteries in a fantasy setting, so I was familiar with some of the challenges of series writing. Specifically, I understood the need to balance what readers enjoyed in your last book and expect in your next one against the need to avoid telling the same story over and over.

Which is why I decided to spend the whole first half of the book treating the villain as the protagonist.

I don't think there's any doubt that this character, Bo-Kate Wisby, is villainous. She does something ghastly in her first scene, and is completely unapologetic about it. She even enjoys it. More importantly, she feels it's justified by past mistreatment, which gets at the heart of something that the best villains all share: they believe they're the heroes of the story. Bo-Kate certainly does.

There are risks in putting your villain center stage. Your readers might decide they don't enjoy the story's moral perspective, or apparent lack of one. Your hero might lack the narrative time to be developed to the same degree, and thus throw the whole book out of balance. But you also might gain a level of empathy that enriches the story's emotional experience in a way the reader doesn't expect, showing them that even the villain has his or her sympathetic side. That’s what I hope readers take away from Bo-Kate in Long Black Curl.
__________________________________

I grew up in west Tennessee an hour north of Graceland (home of Elvis) and twenty minutes from Nutbush (birthplace of Tina Turner). I've been a reporter, editor, photographer and door-to-door vacuum cleaner salesman.

I now live in a Wisconsin town famous for trolls, write before six in the morning and try to teach my three kids to act like they've been to town before. 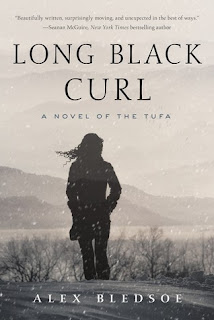 
Long Black Curl: a brand-new tale in Alex Bledsoe’s acclaimed urban fantasy series, where magic is hidden in plain sight and age-old rivalries simmer just beneath the surface
In all the time the Tufa have existed, only two have ever been exiled: Bo-Kate Wisby and her lover, Jefferson Powell. They were cast out, stripped of their ability to make music, and cursed to never be able to find their way back to Needsville. Their crime? A love that crossed the boundary of the two Tufa tribes, resulting in the death of several people.

Somehow, Bo-Kate has found her way back. She intends to take over both tribes, which means eliminating both Rockhouse Hicks and Mandalay Harris. Bo-Kate has a secret weapon: Byron Harley, a rockabilly singer known as the “Hillbilly Hercules” for his immense size and strength, and who has passed the last sixty years trapped in a bubble of faery time. He's ready to take revenge on any Tufa he finds.

The only one who can stop Bo-Kate is Jefferson Powell. Released from the curse and summoned back to Cloud County, even he isn't sure what will happen when they finally meet. Will he fall in love with her again? Will he join her in her quest to unite the Tufa under her rule? Or will he have to sacrifice himself to save the people who once banished him?