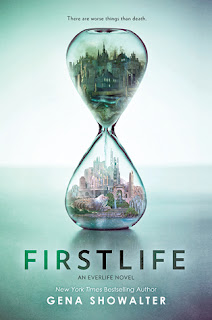 Tenley “Ten” Lockwood is an average seventeen-year-old girl…who has spent the past thirteen months locked inside the Prynne Asylum. The reason? Not her obsession with numbers, but her refusal to let her parents choose where she’ll live—after she dies.

There is an eternal truth most of the world has come to accept: Firstlife is merely a dress rehearsal, and real life begins after death.

In the Everlife, two realms are in power: Troika and Myriad, longtime enemies and deadly rivals. Both will do anything to recruit Ten, including sending their top Laborers to lure her to their side. Soon, Ten finds herself on the run, caught in a wild tug-of-war between the two realms who will do anything to win the right to her soul. Who can she trust? And what if the realm she’s drawn to isn’t home to the boy she’s falling for? She just has to stay alive long enough to make a decision…


There were a few things that I didn't love, but I enjoyed FIRSTLIFE and plan to read more.

Tenley is extremely strong willed and stubborn. I personally thought her decision was obvious early on, yet she was still unwilling to choose a side—even when it cost lives— until it was almost too late. She just didn't want to pull the trigger JUST IN CASE she was wrong or in case her decision was too influenced by others. Unfortunately the way she argues with herself was one of the things I didn't totally love about FIRSTLIFE. It was annoying and took up a lot of the book. On another note, I thought she grew a lot from the beginning of the book and I loved the way she was willing to help others even at her own expense. Lets talk about her parents for a second. I wanted to jump into the book and strangle Ten's parents. Her father is just a grade A douche, but her mom seems to really love her and yet she let her be tortured. I could never imagine a mother letting her child go through what Tenley was put through with her parents blessing.

The romance was a bit blah for me. There is a love triangle involved in FIRSTLIFE, but thankfully one of the prospects becomes more of a big brother/best friend pretty early on which makes it a little more bearable. I was looking for more romance out of the other prospect though. Ten can't really trust him because she knows he wants her to join his 'side', but I still wanted more out of it.

The world is by far my favorite thing about FIRSTLIFE. There is so much involved and the author did a great job of bringing it to life for me. There is a lot of action and danger involved in Ten's journey to choose a side. You never knew what would be thrown at her and her allies and it made for some great suspense. I am very interested in seeing what will happen next.