UFI welcomes Author Efthalia. Thanks for Joining us!!

I’m a bit of a ‘lead foot’ when I drive. I lost my license a few years ago for six months.  It’s amazing how life really slows down when you can’t drive. I’ve also been given the nickname Fangio.

Haha. I think you can guess – reading.

When you completely zone out.  It’s a euphoric feeling being immersed in your world and characters.

Small increments of 20-30 minutes then stop and start again.

How would you pitch Phantasma to someone who has not heard of it before?

or
A daughter of a god,
an immortal warrior,
a demi god out for vengeance,
the ultimate sacrifice.

Can you tell us a little bit about the world that Phantasma is set in?

Modern day Charleston and Greece but most of the series will be set in Charleston.

Do you have a favorite scene in Phantasma?

A scene from Chapter 18, where Xen asks Adam to get some of Carissa’s clothing for tracking purposes.

“Yello,” Adam’s voice cheerfully danced in the receiver.
“I need you to go upstairs to my room and grab any clothes that belong to Carissa.”
“Oooh, do I get to go through the lingerie too? He teased.
Xen growled into the phone.
“Sorry, Xen. I was just kidding.”
“Get the clothes and no lingerie.”
“Not even a bra?”
“Don’t tempt me to break your neck, lykos.”
“Okay, I got it. No lingerie.”
“Clothes only,” Xen bit out.
“Thong?”
“Adam!” Xen’s voice shook and his fangs elongated. He’d choke him just for the hell of it.

Adam as you an see he likes to test the limits of all those around him. Very cheeky wolf.

Efthalia lives in Sydney, Australia with her husband and two children.

Her passion for writing was cultivated by the stories her mother told her as a child.

She has an MA in Writing and is currently studying the Classics and Archaeology at Sydney University.

Phantasma is her debut novel and the first in the Phi Athanatoi Series. 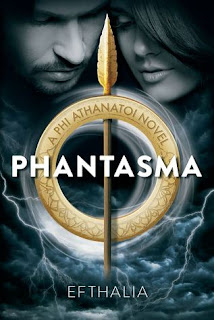 
Carissa Alkippes is the daughter of a god but she doesn't know it. As a cop she's seen her fair share of bad but nothing prepared her for the horror of the world she has been plunged into.

Xen Lyson is the head of the Phi Athanatoi, a group of immortals who have been protecting man for over 2,000 years from the Kakodiamones--demons who want nothing more than to feast on humanity.

Thrown face to face with Xen during a skirmish with the demons, Carissa becomes a pawn in the deadly game of a demi-god who seeks godly powers.

Xen Lyson’s fingers moved to the pulse point of the woman lying at his feet. Skata! He swore internally. He should have guessed she’d come back for her partner. He’d have to leave her.
Take her. He jerked at the sudden possessiveness that demanded he acquire ownership. She’s yours.
His hand moved to her hair as he pushed the strands back from her face. The pads of his fingers deliberately caressed her cheek. His nostrils flared when the scent of her exotic blood hit his nose. He examined her without delay. A large bump and cut graced the back of her skull. He lifted his fingers to his mouth and tasted her blood. Ambrosia danced over his tongue and warmth spread through every cell in his body.
Dikia mou... she’s mine. “Xen, we should move.” Kane Hart, his right hand man, brought him out of his strange musings and sudden infatuation. “Bring the truck. Get the clean team. Stack the demon bodies.”
His brow creased in contemplation at what would be the best course of action for the female and her partner. Taking her would risk exposing her to his world. He looked over her body again. Take her. He wanted to give in and do as his mind bid. “Leave these two untouched.”
As the leader of the Phi Athanatoi, an ancient specialist group of vampires and werewolves, he was sworn to protect humankind. Right now, leaving the woman and her wounded partner would be an act of protecting them from the Kakodiamones, the demons that walked amongst man. Bringing them into his world would only paint them as moving targets.
He stood and sheathed his double-edged xiphos. His acute senses picked up the strong smell of demons. Before he could turn, one descended upon him, blade in hand. He braced himself. The impact was inescapable. Slamming into his back, the demon knocked him forward.
“Vlaka!” Xen yelled. He found his footing quickly, speed and skill on his side. Reaching for his sword, he readied himself for combat. The demon changed tactics when he saw Xen’s weapon. He stopped on the spot, trying to avoid his opponent’s blade.
Xen sneered and bore his fangs at the demon. A threat—one other creatures would acknowledge as to who held the power. The demon stood expressionless.
“Well, come and get me.” Xen coaxed. The demon didn’t move.
Statues...thicker than Greek marble. Xen didn’t need an invitation. His blade hissed through the air, cutting through the demon’s neck and spinal cord, severing his existence. Blood splattered on the already sticky floor. The head thudded on the ground while the body teetered for a second before it too slumped to the concrete.
Kane laid his boot into the beast. “Nice cut, Xen. The bastard didn’t have enough time to blink.” The lykos let out a growl of satisfaction, but then his demeanor changed, his nostrils expanded at the scent of another demon headed in their direction. He turned in time and swung his double swords, severing the demon’s head, blood gushing over him.
“Damn! I just bought this jacket.” He gave the headless body a kick to let out his frustration. The body flew through the air and landed with a thud when it hit the wall on their right. “Dumbass! When will you demons get it?”
Xen smirked. His friend excelled at the combination of lethal and loyal.