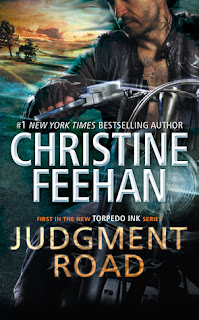 As the enforcer of the Torpedo Ink motorcycle club, Reaper lives for riding and fighting. He's a stone-cold killer who turns his wrath on those who deserve it. Feelings are a weakness he can't afford--until a gorgeous bartender gets under his skin...

Near Sea Haven, the small town of Caspar has given Anya Rafferty a new lease on life. And she's desperate to hold on to her job at the biker bar, even if the scariest member of the club seems to have it out for her. But Reaper's imposing presence and smoldering looks just ratchet up the heat.

Anya's touch is everything Reaper doesn't want--and it brands him to the bone. But when her secrets catch up to her, Reaper will have to choose between Anya and his club--his heart and his soul.


I did enjoy JUDGMENT ROAD, but I wouldn't really call it paranormal romance.

I'm going to jump right into the characters. It takes a bit to really get to know Reaper, but I liked him. He has a really tough past that wasn't easy to read about. He is pretty deadly and comes across as heartless, but I felt for him and was really rooting for his HEA. Anya is on the run, but we don't really find out from what until way into the story. She is alone in the world and it was easy to connect to her feelings. She didn't trust easily and there were a few times that I wanted to shake her and say OPEN UP a little, but I totally got where she was coming from.

I enjoyed getting to know the secondary characters. They are ALL flawed and it will be interesting to watch them in future books. Having said that, I wasn't totally sold on the back stories of the motorcycle club. It is pretty out there and the facts are a little few and far between. I think maybe this might change as we get to know each member better.

The only paranormal thing happening in JUDGMENT ROAD is the fact that it's mentioned a few times that the members of Torpedo Ink motorcycle club have some talents. There isn't much use of these talents and their talents are an afterthought in the grand scheme of things. Maybe this will change in future  books, but as of right now, I don't really feel the paranormal coming through.

Now the romance definitely shines through and the sexy times can get pretty steamy. The relationship between Anya and Reaper is slow to form and has it's issues, but they fit together. When they both let the romance happen it is pure magic.