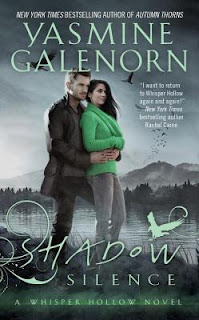 
New York Times bestselling author Yasmine Galenorn invites readers to Whisper Hollow, where spirits walk among the living and the lake never gives up her dead…

Fifteen years ago, I ran away from Whisper Hollow, Washington, a small town on Crescent Lake in the Olympic Peninsula. But truth is, if you were born here, you can never really leave. I'm Kerris Fellwater, and I'm a spirit shaman. It's my responsibility to drive the dead back to their graves, because around Whisper Hollow, people—and secrets—don't always stay buried.

My best friend Peggin finds herself under a curse after she is almost taken by the Lady of the Lake, and the Unliving are determined to drag her back to the hungry waters. As Bryan—my guardian and mate—and I work to break the hex, we uncover a dark and violent mystery from the past. One the Hounds of Cú Chulainn will do anything to guard—even if they must summon a legion of the dead to destroy Whisper Hollow.


AUTUMN THORNS was a fantastic read that quickly had me wanting to read more about the world and the characters of the Whisper Hollow series. I was really excited to get my hands on SHADOW SILENCE and although I really enjoyed it, it didn't wow me as much as I was hoping.

So as I finished SHADOW SILENCE and prepared to write this review I had to sit down and ask myself what was wrong with it. Not a ton, but I quickly pinpointed that the over descriptive explanations and irrelevant additions added to the story killed some of the flow for me. I can't even begin to tell you how many times Kerris mentions that her breasts are big—giant really—and how she has to get special bras and how men in her past just dated her because they had big boob fetishes and oh yeah, her boobs are giant. I got it the first time, I didn't need it repeated and cried over throughout the whole book. The info was injected into situations that it just didn't seem to fit in. On top of that there were a lot of filler things added into SHADOW SILENCE that I could have done without—having to read the steps in which Kerris feeds her cats, washes her hair, etc.

Having gotten that out of the way, I still really enjoyed the characters and the overall storyline. There is a lot of focus on Peggin in SHADOW SILENCE and I enjoyed learning more about her and her relationship with Deev.  Kerris and Bryan's relationship continued to grow as well, but I felt like their relationship aspects of the book were kinda just thrown into the story as a background subject. I will pick up book two when it's time to see if the Whisper Hollow series stays on my must-read list.