Promo + Giveaway: A Fistful of Frost by Rebecca Chastain 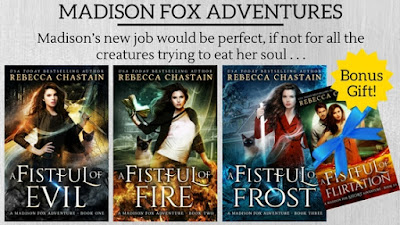 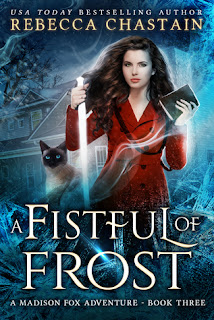 Madison Fox is determined to reform Jamie, her half-evil pooka, but the bond linking her to Jamie works both ways. Already, it has manipulated her into bending the rules. If she continues down this path, she could doom her soul. Since her judgment can’t be trusted, a high-ranking inspector now dictates Madison’s every interaction with Jamie, and each directive drives them further apart.

Unfortunately, Madison has bigger issues than the potential degradation of her soul. Winter has struck with a vengeance. Frost moths plague the entire state, reinforcing the artificially frigid temperature. Worse, cold-blooded, soul-stealing enemies are flocking into her region from the north—creatures Madison has little defense against.

With the inspector scrutinizing her every misstep, Madison is in for the battle of her life. If she hopes to survive, she must make an impossible choice: save herself and her region or save Jamie.

An imaginative urban fantasy filled with heart, humor, and plenty of butt-kicking action—A Fistful of Frost is a book you won't want to miss.


I expected the inspector to look like an Army Ranger, tall, muscular, and radiating an “I could kill you if I wanted to” vibe. The woman who stepped from the car shattered my assumptions. Midfifties, petite, and pale, with a slash of bright auburn in her chin-length white-blond hair, Inspector Pamela Hennessey didn’t look authoritative until her assessing gaze landed on me. Then I fought not to squirm.
“Madison Fox and the pooka Jamie,” she said, not quite a greeting and not a question. It would have sounded rude if not delivered in her posh British accent. “I’ve heard a lot about you.”
“All good, I hope,” I quipped.
She eyed me up and down, giving me a noncommittal, “Mmm.”
My smile froze at the corners.
Rose climbed from the driver’s seat and shut the car door with more force than necessary. The Latina empath gave me a curt nod, as if we were strangers and not coworkers and friends. What the hell? I stopped pretending to smile. Jamie shifted closer, brushing his gloved hand against mine, worry crinkling his eyebrows as he read the tension of the group. I gave him a shoulder bump to reassure him, pretending to be relaxed. Pamela’s gaze snapped from our touching hands to our shoulders to our faces, and I fought the urge to leap away from Jamie as if I were doing something wrong.
“Give me a net and let’s get your purity test out of the way, Madison,” the inspector said.
“Pardon me?” Wasn’t a purity test a medieval way to judge a woman’s virginity? Not only had that ship long since sailed, but I also didn’t see how it would be relevant—or anyone’s business. I checked Brad’s neutral expression. Did details about my sex life fall under the impress her or don’t embarrass me category?
The inspector rounded on Brad, wispy-fine hair flaring on either side of her pink headband earmuffs. “She doesn’t know what a purity test is? You haven’t tested her once in the last five days?”
“Madison’s purity has never been in question.”
A warning frizzled down my spine at Brad’s bland tone. She’d put him on the defense. I glanced to Rose for a clue, but she only grimaced and looked away.
“Don’t let your recent victories make you arrogant, Brad,” Pamela said. “Of course her purity is in question. She’s bonded to a pooka.”
Aha! This wasn’t about virginity; this was about Jamie’s dual nature and the metaphysical bond he’d placed on me. I’d been warned—repeatedly—to be careful of Jamie’s darker half; more than one bonded enforcer had been corrupted by a pooka’s morally ambiguous influence. No one had mentioned purity tests.
“This is to see if Jamie has . . . changed me?” I asked, choosing my words carefully in deference to Jamie. Nothing in his expression said he took offense to the insinuation that our link might have tainted me. He saw nothing wrong with wielding atrum as readily as lux lucis, and if I failed a purity test, it’d probably make him happy.
“Changed you?” Pamela echoed. “No. I need to know if the pooka’s bond has sullied you.”
So much for being tactful. I peeked sideways at Jamie, but he hadn’t reacted, his gaze focused beyond Pamela on the people walking by.
“Is there a problem?” the inspector asked.
“No. Of course not, but, Inspector Hennessey—” I shot Brad a desperate look.
“Call me Pamela. Never Pam.”
“Got it. Um, Pamela—”
“She doesn’t know how to make a net,” Brad said for me.
“Why not?” Pamela demanded, spinning to confront my boss again, the hem of her wool coat flaring to reveal the calves of her pale leather boots.
“I haven’t had the luxury of instituting a methodical training regimen with Madison.”
“Mmm,” Pamela said.
I was starting to hate that noise.
“And if she encountered a frost moth?” she asked.
“She has a lighter.”
One I’d purchased this afternoon at Brad’s insistence. Shaped like a small blowtorch, with a trigger to ignite the flame, it was the fanciest lighter I’d ever owned. It also had the distinction of being the only lighter I’d ever purchased with the intention of using as a weapon—or at least I thought that was the plan. I pressed my lips together. Now wouldn’t be a good time to confess that after reading Val’s entry on sjel tyver, I’d completely forgotten to ask the handbook about frost moths—what they looked like, where to find them, or how to kill them.
“I can instruct Madison on nets now,” Brad offered.
The inspector shook her head. “Let’s get the inquisition out of the way.”
The what? 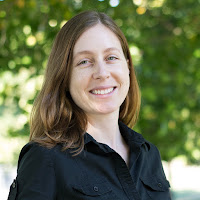 REBECCA CHASTAIN is the USA Today bestselling author of the Madison Fox urban fantasy series and the Gargoyle Guardian Chronicles fantasy trilogy, among other works. Inside her novels, you’ll find spellbinding adventures packed with supernatural creatures, thrilling action, heartwarming characters (human and otherwise), and more than a little humor. Rebecca lives in Northern California with her charming husband and bossy cats.

Sign-Up for Rebecca's newsletter now and get A Fistful of Flirtation—Madison Fox #2.5!