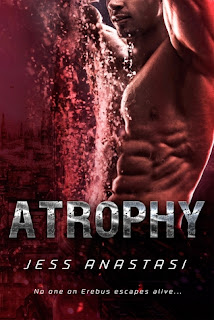 
No one on Erebus escapes alive...

Twelve years on the prison planet Erebus makes a man long for death. The worst part for Tannin Everette is that he was framed for murder. He's innocent. When the ship Imojenna lands for emergency repairs, Tannin risks everything to escape...only to find himself face to face with the captain's undeniably gorgeous sister.

Zahli Sherron isn't planning on turning Tannin in. In fact, she actually believes him. Sure, he's sexy as every kind of sin, but he's no criminal—so she hides him. But no one escapes from Erebus and lives to tell about it. With every day that passes, Zahli further risks the lives of the entire crew...even as she falls in love with a man she can never have for herself.


Zahli and the rest of the Imojenna crew are forced to land on Erebus to repair their ship and she can't wait to get off of it. It's Tannin's chance to escape the prison planet Erebus and he is taking it. Zahlia and Tannin's worlds collide in a story about love, loyalty and the fight against the aliens that are taking over their world.

I really liked both Zahli and Tannin and together they made a great team. They had a lot of issues to work out, but they had each others back when it was most important and their connection only grew as they got to know each other. The romance although important to the story, isn't in your face for the whole book as there are some other pretty big things going on.

The entire Imojenna crew helped keep things interesting. They each brought a little something to the storyline. The world of ATROPHY was interesting. I enjoyed the way that Anastasi brought it alive. The world and the problems that came along with it played a big role in the way the characters act and conduct their lives.

I'm not sure if ATROPHY will be part of a series, but there is a lot of story potential to work off of it and I hope to see a book featuring Zahli's brother Rian and Mirella. They have a LOT of sexual tension and I can see it exploding into something great. I would definitely read more.