UFI welcomes C.J. Burright Author of Wonderfully Wicked. Thanks for Joining us!!

Hey. I’m Lydon v’al Endrian from Wonderfully Wicked by C.J. Burright. Let’s get one thing straight: I’d rather be brushing a feral cat’s teeth than writing a blog post, but apparently C.J. thinks her time’s more precious than mine. So while she’s performing authorly duties (i.e. eating bonbons and napping on the couch while watching Supernatural reruns), I’m tasked with drudging up something creative from the dungeons of my mind. I’ll try not to scare you. Nah, no promises.

One thing you should know about me—I’m a V’alkara, which means I have the sweet ability not only to invade dreams, but to take pieces of them for myself. Better yet, I can assume the forms I steal, which makes Halloween parties a blast. Who wouldn’t want to be fat Elvis stuffed in a rhinestone jumpsuit for a day? Horrifying. And since my world revolves around the nightmares of my dreamcaster, Kalila (I call her Little Monster. She deserves it, trust me), this is a handful of nightmares I’ve enjoyed with her so far…and their meaning, according to Freud. Kinda.

Spiders. I think the creepy-crawlies can be cuddly, but for some reason they make Kalila a little twitchy. Here’s what Freud says about spiders: "A spider in dreams is a symbol of the mother, but of the phallic mother, of whom we are afraid; so that the fear of spiders expresses dread of mother-incest and horror of the female genitals."

What the…? Kalila’s mom went AWOL at birth and I promise you, my Little Monster has no horror relationship with her womanly bits. This is a more believable explanation, from The Huffington Post: "Spiders weave a web -- a beautiful, intricate trap to catch its prey," says Richmond. "As such, spiders are associated with manipulation."

In other words, spiders are a representation of me. No wonder I like them…and she dreams about them. She might deny she likes me, but dreams don’t lie.


Death. Kill a girl once in her nightmare, and she won’t let you live it down. And screw Freud—he’ll just say death in a dream means she’s repressing her sexual needs or some other B.S. Instead, I’ll refer back to The Huffington Post, which has a pretty decent series on dreams and their meanings. In case you want to psychoanalyze your deepest, darkest dream desires. Perverts. According to Sumber, dreams about death often indicate "the symbolic ending of something, whether that's a phase, a job or a relationship." In other words, Kalila’s ready to ditch her old life and start a new one with me. I knew she couldn’t resist my charm much longer. And that knife to my shoulder? A love tap.

Chased by monsters. According to dreammoods.com (Freud has nothing on them), chase dreams stem from avoiding anxiety in real life. Exactly. Kalila isn’t running from me, she’s running from herself. She fears her future. And she should. With the V’alkara brotherhood hunting dreamcasters down, she won’t have it easy. Neither will I.

Sayanora, suckers. Oh, and pick up a copy of Wonderfully Wicked. C.J. needs more bonbons. And if you can’t bring yourself to fork out the dough (tightwads) *cough*, comment for a chance to win a freebie copy plus other stuff—fuzzy socks (who wouldn’t want black fuzzy socks?), chocolate covered coffee beans (Kalila’s an addict), a kitty cat self-defense keychain (meow), and a bookmark. Score.
__________________________________ 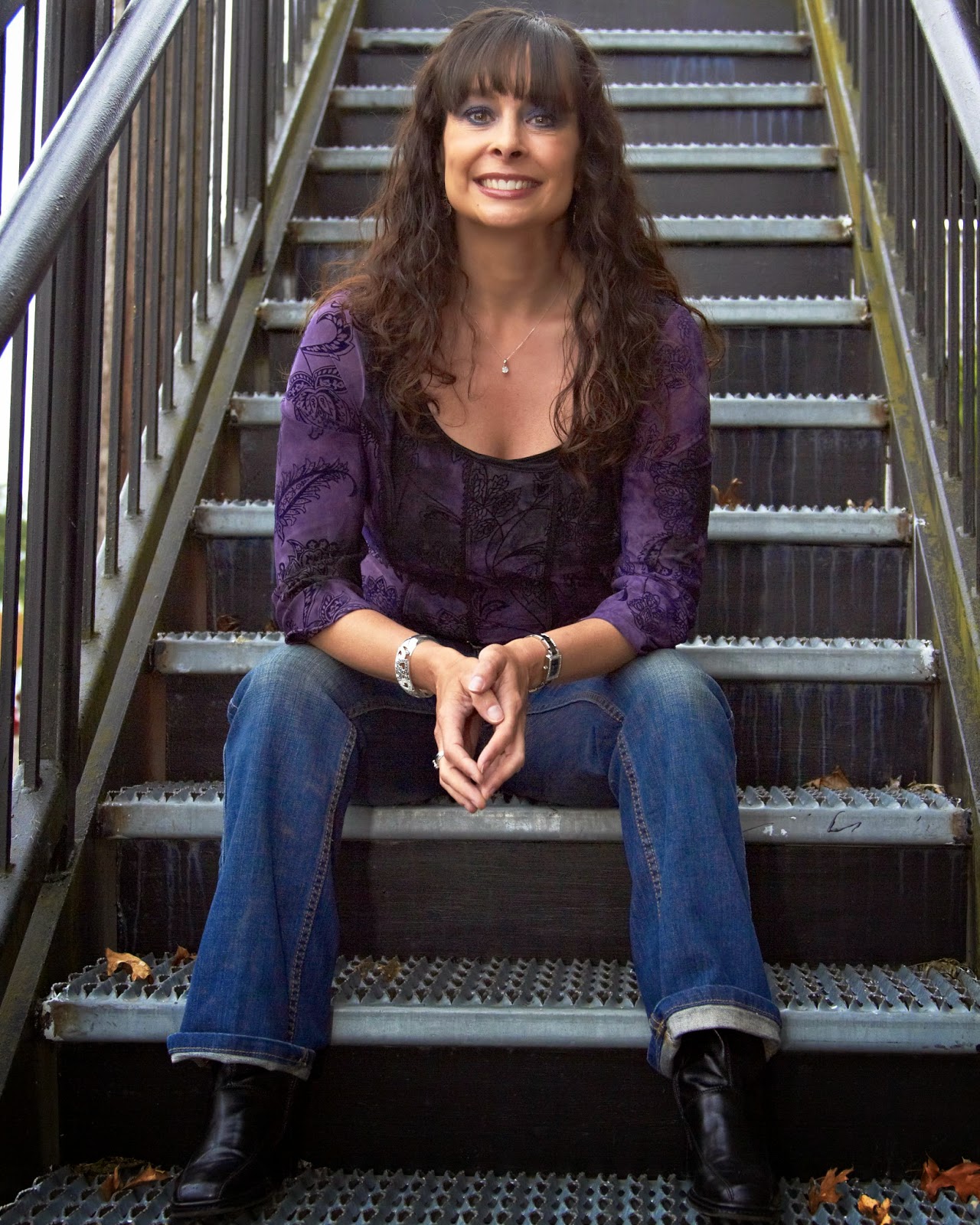 C. J. Burright was born and raised in Oregon and loved it so much she never left. While she has worked for years in a law office, she chooses to avoid writing legal thrillers and instead leans toward urban fantasy, paranormal romance, or—since all things medieval and magic fascinate her—fantasy romance. A member of Romance Writers of America and Secretary for the Fantasy, Futuristic & Paranormal special interest chapter, C. J. also has her 4th Dan Black Belt in Tae Kwon Do and believes stories should always include a gratuitous fight scene. In what spare time she has, she enjoys working out, reading, gardening, and rooting on the Seattle Mariners with a nice glass of wine. She shares a house with her husband, daughter, and a devoted herd of cats. 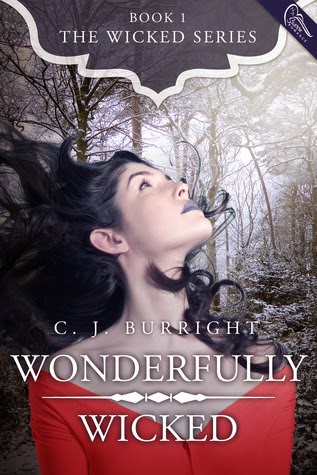 
A dreamcaster with the ability to channel creatures from her nightmares, headstrong and cynical Kalila Montgomery longs for a peaceful, picket-fence life… until the man literally of her dreams kidnaps her.

Survival quickly becomes her number one goal, yet a growing attraction to the man in her nightmares is impossible to ignore. While she fears he will kill her, other, more terrifying enemies surround her, and Kalila succumbs to his scheme to escape. She may be his one hope for freedom…

A deadly combination of power, cunning, and cold-hearted charm, Lydon v'al Endrian fears nothing. Feels nothing. Chained to a brotherhood of men with the supernatural ability to invade dreams, he hunts dreamcasters to be harvested for their dreams and killed. His target: Kalila Montgomery. But Kalila awakens an undeniable dark desire and a longing for a freedom long-lost.

To gain everything he craves, Lydon must seduce Kalila before his plot is discovered… a hopeless challenge which, if failed, will earn him a death-sentence. Caught up in a dangerous world of secrets and obsession, doubt and betrayal, Kalila and Lydon face the nightmare of their lives, where love will either deliver them—or destroy them both. 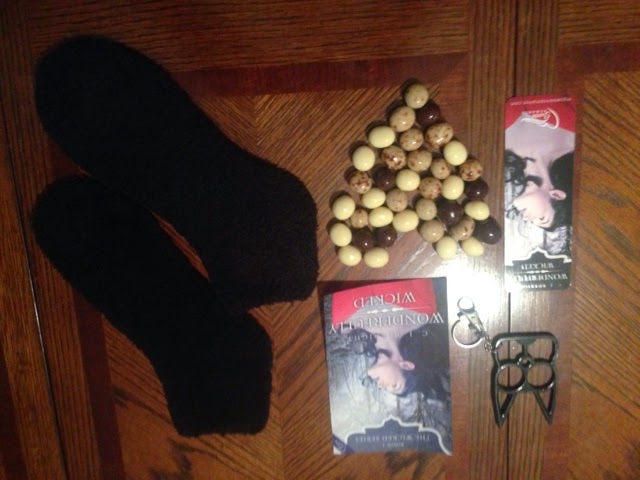 Comment for a chance to win a freebie copy of Wonderfully Wicked plus other stuff—fuzzy socks (who wouldn’t want black fuzzy socks?), chocolate covered coffee beans (Kalila’s an addict), a kitty cat self-defense keychain (meow), and a bookmark. Score.

Mortal Enchantment is ON SALE! 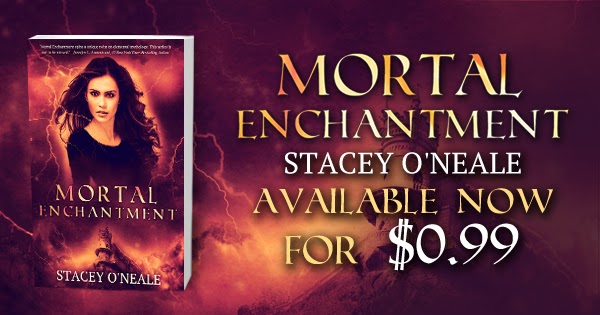 Mortal Enchantment kindle edition on sale for $0.99 for the next 7 days.