UFI welcomes Author Kirsten Weiss. Thanks for Joining us!!
Steampunk Stagecraft
Guest post by Kirsten Weiss, author of A Midsummer Night’s Mechanical.
True confession: the story for A Midsummer Night’s Mechanical, book three in my Sensibility Grey series of steampunk suspense, started with the title. One of the most popular stage plays during the Victorian era was A Midsummer Night’s Dream, partly because so many of its characters are fairies. Not only had fairies made an appearance in the first two books in my Sensibility Grey series, but I’d also boxed myself in with my titles, which are all riffs on the classics. And Shakespeare’s A Midsummer Night’s Dream certainly qualifies as a classic.
But I’d also been thinking hard about a steampunk novel involving a theater. The Victorians were masters of stagecraft, playing with lighting and trap doors, so adding steampunk-inspired mechanicals to a theater seemed a natural fit for Victorian-era sci-fi.
One popular theatrical event in Victorian England was the tableau. You might have heard or seen movies of these tableaus being conducted at house parties. Guests dressed in costume (generally taken from the host’s attic), formed a tableau, a curtain was pulled aside, and guests guessed the scene being produced. But these tableaus took place in theaters as well. And the audience didn’t just walk in, look at the tableau, and leave. The theater owner would never be able to sell tickets for an event that simple. Fortunately, the Victorians were creative with lighting and with trap doors. So fairies would appear as if by magic in certain parts of the stage, or the lights would first shine in one part, then then next to bring out different elements of the tableau.

There were significant improvements to stage lighting during the nineteenth century, transitioning from oil lamps to gas lighting in 1817, then to limelight in 1837 to electric arc lamps in 1848, and electric filament lamps in 1881. This allowed actors to perform over a wider range of stage and for portions of the theater to fall into impenetrable blackness.  Colored light projected on smoke was also used, along with colored flares. And the Victorian stage workers achieved backlighting with translucent gauzes.
The Victorians also instituted improvements in scenery design, using scrolling panoramas and projecting images from magic lanterns. Machinery above and below stage was used to move scenery and manipulate objects and people through trap doors.
Trapdoors, lighting, moving machinery… the theater seemed a perfect place to incorporate steampunk tech. Until I got to actually writing the story, and took the concept further by developing a stage that can move itself from place to place. But that’s only one of the secrets hidden inside the stage in A Midsummer Night’s Mechanical.
__________________________________

Kirsten Weiss worked overseas for nearly fourteen years, in the fringes of the former USSR and in South-east Asia.  Her experiences abroad sparked an interest in the effects of mysticism and mythology, and how both are woven into our daily lives.

Now based in San Mateo, CA, she writes steampunk suspense and paranormal mysteries, blending her experiences and imagination to create a vivid world of magic and mayhem. Kirsten has never met a dessert she didn’t like, and her guilty pleasures are watching Ghost Whisperer re-runs and drinking red wine.

Sign up for her newsletter to get a free copy of the full length urban fantasy novel, The Alchemical Detective, and updates on her latest work at: 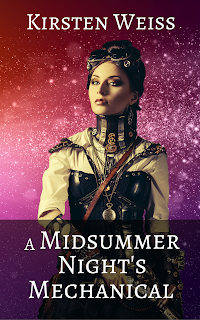 Blamed for burning down the San Francisco wharf, clockwork inventor, Sensibility Grey has spent the last three months in hiding. Now all she wants is to depart the gold-crazy boomtown for a new life in the East. So when the owner of a traveling theater offers her work embellishing his mechanical stage, she turns him down. Then he turns up dead on her doorstep along with his enigmatic stage.

An explorer of the mysteries of aether, Sensibility has her own secrets to keep, and adversaries who’ll stop at nothing to learn them. Is the mechanical stage a part of a bigger game? Or the key to unlocking her true, magical potential?

A Midsummer Night’s Mechanical is book three in the Sensibility Grey series of steampunk suspense.


Sensibility sat cross-legged upon her bed and tried not to think. She tried not to think of the ache where her stays pinched her back. She tried not to think of tomorrow’s journey across the American wilderness. She tried not to think about the clamor of banging drums and tootling fifes and—
“Oh, good gad!” She clenched her fist, pieces of quartz crystal biting into her flesh. Sensibility sprang from the bed and threw open the boarding house window. Oppressive heat, acrid from the nearby outhouse, rolled into the room. Wrinkling her nose, she leaned out over the fenced back yard and craned her neck. The afternoon sun streamed through the laundry, hanging limp on the line. From her position, she couldn’t see the street procession. But neither could she avoid hearing their blasted parade.
Something scuttled near her elbow, and she jerked away, slamming her head on the window frame. White pain arced through her skull.
A baby raccoon, not much larger than the palm of her hand, cowered on the other end of the narrow sill. It scrabbled, hunching into a tight ball, trapped on the high ledge.
“Ow.” She winced, rubbing her throbbing head and glad her chignon had taken the brunt of the blow. “How on earth did you get up here?”
The raccoon mewled.
“You shall have to make your own way home, for you cannot come inside. Mrs. Watson has a strict rule about animals inside her boarding house.”
Gently, so as not to disturb the creature, she shut the window. The raccoon peered over the ledge then looked at her, his expression plaintive.
Attempting to ignore the animal, she paced the denuded room, her brown skirts swishing.
They had ample space to swish. Nearly all her belongings lay compressed into a single carpetbag, set before the empty wardrobe. The bedroom had an air of abandonment.
Unsettled, Sensibility rattled the quartz crystals in her hand and glanced to the window.
The animal stared inside, forlorn.
She tugged at her collar. It was such a small thing. But rules were rules. “You found your way onto the ledge. You can find your own way down.”
Sensibility turned to the journal open on the desk. Her sketch of an unworldly creature she’d once encountered scowl from the page. Frowning, she slammed the book shut. It had been careless of her to have left it open. Strange, she couldn’t remember examining the journal before she’d gone downstairs to retrieve her luncheon.
The crystals pressed into her palm. She was so close to a breakthrough in aether technology, but the clues remained buried. Buried in the remains of her father’s last journal. Hidden in a journal from a traveling occultist. Scattered throughout her own notes and theories. One day soon, she would fit those pieces together. It was madness to hope she could solve that problem today.
Sensibility opened her hand and gazed at the quartz crystals. She’d mastered the use of aether to power small devices. But aether had other applications, such as distance control and distance vision. These applications eluded her. “There has to be a way…”
She glanced at the window.
The animal raised itself on its hind legs and pressed its tiny black paws to the glass.
Sensibility groaned. “I know I’ll regret this.” Pocketing the crystals, she opened the window.
The raccoon cowered.
“You,” she said, “being a wild animal, will attempt to bite me if I rescue you. But I will have none of it. I shall pick you up, I shall take you outside, and you shall neither bite nor scratch. Do you understand?”
In a swift motion, she grasped it by the scruff of the neck and lifted it inside. It writhed, and her grasp on it loosened.
She gasped. “Don’t….”
The raccoon dropped to her desk and shook its head. Whiskers twitching, it scuttled to her abandoned luncheon tray and made free with a bit of toast.