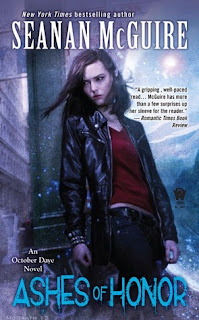 
It’s been almost a year since October “Toby” Daye averted a war, gave up a county, and suffered personal losses that have left her wishing for a good day’s sleep. She’s tried to focus on her responsibilities—training Quentin, upholding her position as Sylvester’s knight, and paying the bills—but she can’t help feeling like her world is crumbling around her, and her increasingly reckless behavior is beginning to worry even her staunchest supporters.

To make matters worse, Toby’s just been asked to find another missing child…only this time it’s the changeling daughter of her fellow knight, Etienne, who didn’t even know he was a father until the girl went missing. Her name is Chelsea. She’s a teleporter, like her father. She’s also the kind of changeling the old stories warn about, the ones with all the strength and none of the control. She’s opening doors that were never meant to be opened, releasing dangers that were sealed away centuries before—and there’s a good chance she could destroy Faerie if she isn’t stopped.

Now Toby must find Chelsea before time runs out, racing against an unknown deadline and through unknown worlds as she and her allies try to avert disaster. But danger is also stirring in the Court of Cats, and Tybalt may need Toby’s help with the biggest challenge he’s ever faced.

Toby thought the last year was bad. She has no idea.


So, why did I pick ASHES OF HONOR as my tour stop reread? ** SPOILER ** It's the book that Toby and Tybalt FINALLY stop dancing around each other and their feelings. It was torture waiting for it to happen, but then it did and all was right in the world.

“He sounded so tired and so earnest. I worried my lips between my teeth before asking, "Does this have anything to do with what you told me before?"Tybalt blinked. Then he snorted a brief laugh, and asked, "October, in the years since your return ... has anything not been in some way related to what I told you before? You handed me a hope chest in a dark alley. You took my heart as collateral, and you've never returned it.” ― Seanan McGuire, Ashes of Honor

Seanan McGuire is a California-based author with a strong penchant for travel and can regularly be found just about any place capable of supporting human life (as well as a few places that probably aren't). Seanan was the winner of the 2010 John W. Campbell Award for Best New Writer; Rosemary and Rue, was named one of the Top 20 Paranormal Fantasy Novels of the Past Decade; and her novel Feed, written under the name Mira Grant, was named as one of Publishers Weekly's Best Books of 2010. She also won a Hugo for her podcast, and is the first person to be nominated for five Hugo Awards in a single year.

Don't forget to grab a copy of the newest October Daye Novel! 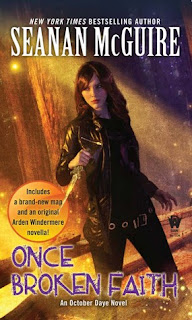 Politics have never been October “Toby” Daye’s strong suit. When she traveled to the Kingdom of Silences to prevent them from going to war with her home, the Kingdom of the Mists, she wasn’t expecting to return with a cure for elf-shot and a whole new set of political headaches.

Now the events she unwittingly set in motion could change the balance of modern Faerie forever, and she has been ordered to appear before a historic convocation of monarchs, hosted by Queen Windermere in the Mists and overseen by the High King and Queen themselves.

Naturally, things have barely gotten underway when the first dead body shows up. As the only changeling in attendance, Toby is already the target of suspicion and hostility. Now she needs to find a killer before they can strike again—and with the doors locked to keep the guilty from escaping, no one is safe.

As danger draws ever closer to her allies and the people she loves best, Toby will have to race against time to prevent the total political destabilization of the West Coast and to get the convocation back on track…and if she fails, the cure for elf-shot may be buried forever, along with the victims she was too slow to save.

Because there are worse fates than sleeping for a hundred years.


Tour Wide
a Rafflecopter giveaway
Posted by StacyUFI at 3:00 AM 4 comments: