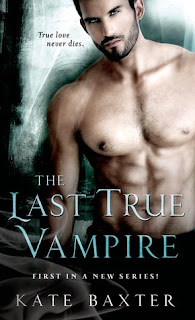 
As Michael’s eyes lit on a female not twenty feet away, he knew without a doubt that it was her blood that called to him and her scent that had awakened him.This female had tethered his soul and returned it to him.

He is the last of his race. The one true king of the vampires. Michael Aristov roams the nightclubs of L.A. after dark, haunted by his past and driven by his hunger. The last of the Ancient Ones, he alone has survived the destruction of his race at the hands of the slayers. Now he is forced to hunt and feed like a common vampire, a creature of lust. Nothing in this world can fulfill his needs…until he meets a woman who’s everything he’s ever wanted. And more.

Her name is Claire Thompson. Her blood is so sweet, so intoxicating—the smell alone draws Michael to her like a moth to the flame. Sly, sexy, and seductive, Claire seems to be the only mortal who can satisfy his craving and seal his fate…forever. Can she be trusted? From their very first kiss, the last true vampire sweeps Claire into a world in which darkness rules desire—and where falling in love is the greatest danger of all…


THE LAST TRUE VAMPIRE has a very interesting blurb and I quickly got into the storyline when I started reading.

Claire is just getting by as a waitress, but her side job as a pick pocket and hustler makes it so she has a little extra. I had no problem instantly liking her. We find out that she is very loyal and caring with a backbone to boot. Michael has a lot going for him, but it took me a bit to care about him and what happened to him. He has a long and difficult (and pretty hellish) past which leaves him as the only true vampire left.

I wasn't crazy about the relationship between Claire and Michael for a good chunk of the book. He was kinda an a-hole and treated her like she was just a blood bag even though he truly wanted her and had strong feelings for her. I get that he is old and hasn't had a relationship in a really long time, but come on, how can you not know to treat a woman that knows NOTHING about your world and is a scared better than that. It bothered me. He did get better and he did grow, but that was always my first impression of their relationship.

NOW I really enjoyed the secondary characters in THE LAST TRUE VAMPIRE and the world building was pretty good. The danger was heart pounding and there was a nice pace throughout the story. There were plenty of twists thrown in as well and I really enjoyed the point in which the couple were finally on the same page. My favorite secondary character, Ronan, will be featured in book 2, so I plan to pick it up when it's available.