UFI welcomes Nola Sarina Author of Gilded Destiny. Thanks for Joining us!!

First, I am a mother. That always comes first in my life.

After that comes the rest of me: wife, writer, and Tarot card reader.

My ancestors were Romani Gypsies from Poland/Russia/wherever, since it’s really hard to track the origins of travelling ancestors. I learned about stereotypical Gypsies when I was young and began reading Tarot cards before I hit my teens. Now, I use the Tarot to guide me in everyday life, to open my eyes to things I may have missed, and to foreshadow what challenges may lay ahead. I love reading cards for others, too. All of it makes up a piece of who I am, along with the littler puzzle pieces like “Star Trek fan” and “constantly wears zip-up hoodies.”

Down time is kind of rare for me. But my best friend (and writing partner on other projects) has a gaggle of kids of her own, so we get together for family dinners and video games and swimming. In the summer, we also geocache and hike along the river. It really takes someone else enticing me away from the writing/housework routine with magical phrases like “treasure hunting” and “shiny rocks in the river” that make me go OMG, maybe we’ll see a FAERY!!!

And it’s always worth it, too. One time we found a big boulder and broke it apart because it was loaded with crystals inside. Imagine the glee on the faces of seven kids crowding around a rock that opens up and reveals what they think are diamonds. J

Probably the daydreaming. Like, when you read a book, you don’t think about, “How many scenes in this book were structured while the author was in the bathtub?” But the answer is: a lot. I spend more time imagining the scenes, arranging the characters in my head and flowing through their dialogue than I spend writing them out.

Hell, sometimes my husband catches me staring into space and moving my lips and hands around while my characters are talking to each other. And then I’ll get really into it and gasp out loud, or laugh at something and then my husband can’t keep it in anymore and he starts laughing. But I get SO INTO IT.

Action scenes, not so much. I’m not running around my yard going, “AAAHH! VESPERS!” and ducking and rolling through the mud or anything. I swear. *shifty eyes*

Every time I complete a scene, I read back over it, and then I set it aside for an hour, a day, a week, whatever time my brain needs to form the next scene in my head. But when I sit down to write the new one, I always re-read the last thing I wrote.

Also, coffee is a must before writing, but I do sometimes sip tea while writing for one reason only: I can keep the teapot next to me and pour into my little tiny teacups and sip a little, and then when I draw a blank on a sentence, I pour another cup and sip it so it looks like I’m doing something, rather than just staring at the screen going duuuuuhhhhh…….. *flatlined brain*

Jacqueline Carey is my favorite Fantasy author. Her worlds are elaborate, refined, and her characters experience the world through vivid relationships and conflicts that I’m so invested in because she just knows how to make you cheer for a character’s success.

I’m also a big fan of Karen Chance and her sense of humor, and the action that is so packed with the unexpected that I flip the pages until I’m exhausted!

How would you pitch Gilded Destiny to someone who has never heard of it before??

A woman's memory returns when she falls in love with the monster who took it from her.

What can you tell me about the world that Gilded Destiny is set in?

Gilded Destiny is set in this world, and the events of the immortals involved are always hidden from the public eye. The Vespers move at night and on secret trains, and forbid any human outside the train company to know of their existence. In fact, that secrecy leads to the most frightening conflict in the book: Calli’s exposure to so much of the Vesper world puts her in serious danger from the brutal Master she fears.

Do you have a favorite scene in Gilded Destiny?

The sex. Hahahaha Okay, no seriously… the sex. *laughs* What can I say? I write what I love, and I love having my characters connect on that intimate level. I also love allowing them to walk on that border between the most forbidden pleasure and the most exquisite danger, as is the nature of sex between Vespers and humans.

Which character was your favorite to write about? What about the hardest to write about?
Nycholas was a joy. He’s quite different from the other Vespers I’ve written about, because he’s already defied the Master and isn’t stuck in the repetitive life of servitude, anymore. The thing about Vespers is that they don’t get to enjoy how awesome they are, since they’re always oppressed beneath their duty to safeguard humanity, their food source. Nycholas gets to be a bit freer, eat when he needs to, love with a depth of which he’s not afraid, and seek what he wants without giving a crap about the repercussions unless it personally affects him.

Calli was difficult for me, because I’m not good at writing female 1st person voice. Or at least I wasn’t, until Calli. She taught me a lot about how a woman thinks and behaves, but I’m so used to male voice (despite being a woman, myself) that it took a few tries to really sink into her voice and figure out where she came from, and what she wants.

Gilded Destiny is the first in a trilogy of Vesper novellas which will allow the reader to understand the divide between the genders of the Vespers as well as learn more about their origin through the eyes of unique characters falling dangerously in love.

In addition to the novellas, I have the full-length novels in the series Vesper on submission to publishers thanks to my amazing Inklings agent Michelle Johnson. Vesper explores the relationship between the immortal Levi and a certain red-headed human woman who pursues him, and the dire consequences that result from his eventual betrayal of his Master’s rules.


Nola is a mother, wife, writer, and giggle-a-holic, living in Canada and raising a pack of kids. In her spare time she can be found geocaching, guzzling coffee, or tending to her garden. Her VESPER series is on submission by her agent to publishers, along with WILD HYACINTHE, a paranormal romance co-authored with Emily Faith.
__________________________________ 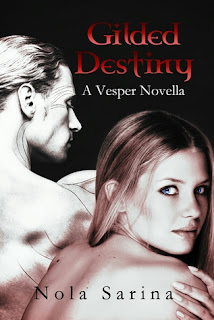 
A woman's memory returns when she falls in love with the monster who took it from her.