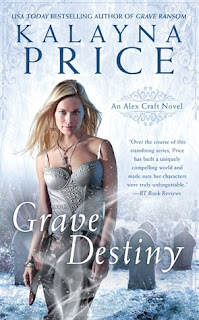 Grave witch Alex Craft can speak to the dead, and that makes her a dangerous enemy for anyone with something to hide. . . .

Alex is still trying to come to terms with her changing powers and her growing ties to Faerie when a case she’d rather avoid falls right into her lap. A fae prince desperately needs Alex to investigate a politically sensitive murder. She reluctantly agrees to the case, taking FIB agent Falin Andrews along as her backup.

But as Alex begins to delve into the mystery, she realizes that the intricate web of alliances and intrigue in the Faerie courts is strained to its limits. War is about to break out, one that threatens to spill over into the mortal realm. This murder is tied right to the center of centuries-old arcane unrest, and if Alex isn’t careful she may follow the twisting path ahead of her right into her grave end.


GRAVE DESTINY is up there with my favorite installments of the series.

A few thoughts on the men in this series. Prince Dugan—of the shadow realm— plays a pretty big part in GRAVE DESTINY and I have to say that I like him a whole lot. I wouldn't be sad if he ended up being a real contender for Alex's heart. We don't see much of Death in GRAVE DESTINY, so if you're a Death fan, you will be disappointed. And then there's Falin. I never disliked him and can see him and Alex ending up together. The events in GRAVE DESTINY definitely made that a possibility.

I read on one review that this might be the last book of the series and I really hope that it's a horrible rumor because I don't feel like Alex's story is over. I really want to explore more of her world and watch her get her HEA.