UFI welcomes Misty Evans Author of Revenge is Sweet. Thanks for Joining us!! 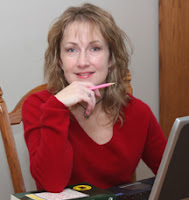 ME: I sing Disney show tunes when I’m working in the kitchen!

ME: I love to cook and bake (hence my show tune addiction). I read and listen to music, and I enjoy traveling, either in person or through the pages of a good book.

ME: Seeing the scenes in my head. My characters are always up to something, and when I can’t sleep, all I have to do is tune into the movies playing in my imagination.

ME: Depends on the book. With some stories, I need to listen to certain songs before I write, or I need to brainstorm with a friend. Other times, I need complete quiet and solitude.

How would you pitch Revenge is Sweet to someone who has not heard of it before?

ME: Kali Sweet is a vengeance demon who works for the supernatural world’s version of the Justice Department. She loves humans and tries to protect them from supernaturals. She’s also in love with the guy who left at her at the altar three hundred years ago and that’s a big problem since Rad happens to be a demon hunter.

Can you tell us a little bit about the world that Revenge is Sweet is set in?

ME: RIS is set in Chicago. I love Chicago and it’s a great location for magic and supernatural creatures. A few humans in RIS know Kali is a demon and understand supernaturals exist, but most are oblivious. Kali lives in an abandoned Gothic church with a creepy cemetery out back, which also is fun to write about and plays a key element in the plot.

Do you have a favorite scene in Revenge is Sweet?

ME: Yes! There’s a scene where Kali and Rad are in a coffin hiding from Chicago’s vampire king. Things get a little out of hand and Rad ends up being Kali’s blood slave. Their conversation was hilarious to write.

ME: Kali’s my favorite. Writing a badass demon in first person point of view lets me channel everything from Italian cuss words to black magic into the story. The hardest character to write was Kali’s tech guru, JR. I’m SO not a techie person, so I did lots of research to know what he’d be interested in and good at.

Her Witches Anonymous series has garnered 5-star reviews and was dubbed a Fallen Angel Reviews Recommended Read. Both the Super Agent Series and the Witches Anonymous Series have been on multiple Amazon Kindle bestsellers lists.

She has short stories in Entangled, A Paranormal Anthology, and Every Witch Way But Wicked. All proceeds from Entangled go to the Breast Cancer Research Foundation and all proceeds for EWWBW go to Nathon Fillion’s Kids Need To Read charity.

Misty is currently at work on the next books in all her series. She likes her coffee black, her conspiracy stories juicy, and her wicked characters dressed in couture. When not reading or writing, she enjoys hanging out with her husband of twenty-two years and their twin sons. Learn more and sign up for her newsletter at www.readmistyevans.com. Like her author page on Facebook or follow her on Twitter. 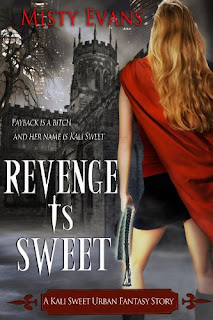 
Payback is a bitch and her name is Kali Sweet...


I’m Kali Sweet, the best damn vengeance demon on Earth. I work for the supernatural world’s Justice Department and protect innocent humans from otherworldly creatures like me. While I can’t take revenge for myself, I make sure justice is done for others.

But when my latest run-in with Chicago’s vampire king backfires, the fallout leaves me with three big problems: a powerful Undead enemy who wants my head, my boss looking over my shoulder, and three personal blood slaves jeopardizing my reputation.

One of those slaves happens to be sexy rock star Radison Beaumont – the half-human, half-chaos demon who left me at the altar three hundred years ago. Even if he does need my blood now to survive, Rad and I will always be enemies.

Especially since he’s joined an ancient society of demon killers—and I’m the number one demon on their most wanted list.

Ok complete cover honesty. I don't like it, Its blah, makes REVENGE IS SWEET look like it will be super corny and I would have never picked up the book to read the blurb if I saw it sitting on a shelf. Luckily for me I joined the book tour and decided to bypass the cover and read it anyways.

Everyone knows I like snarky ladies and Kali is snarky, has an attitude, doesn't take crap and knows how to kick @ss. She ends up being more then meets the eye. It was hard not to like Rad (Radison) even though he left Kali at the alter, he complemented Kali well and they worked well together when they allowed themselves to bypass their issues with each other. I also enjoyed the secondary characters they did a great job of rounding out the story.  I enjoyed the world that Misty created. I could totally see myself in it among all the witches, vampires, demons, etc, etc. The story flowed well and a lot happened between the chapters. There were some great twist and turns thrown in. I have not read any of Misty's other books but I guess a few characters in REVENGE IS SWEET are in another of her series so I might have to check them out. The ending leaves you wanting to read more of the story so I hope Misty does another book tour that I can jump into. I'm glad I gave the book a chance despite the cover.

FILL OUT FORM TO ENTER
Read more »
Posted by StacyUFI at 3:00 AM 17 comments: