UFI welcomes Natalie J. Damschroder Author of The Goddess Rising series. Thanks for Joining us!!


Heroic Traits in Goddesses
A while ago, I joined author MJ Fredrick in an event called The Month of the Hero. We took turns exploring heroic traits in some of our favorite heroes on TV, in the movies, and in books. Of course, most of these traits are what make our female main characters heroic, too, so I thought it would be a good way to close out my blog tour for Sunroper (book 3 in the Goddesses Rising trilogy) with a similar exploration. So here are five heroic traits, as embodied both in the goddesses of my fictional world and in five of my favorite TV and movie heroines.
A heroic journey usually has to start with belief. The heroine must believe in what’s happening, or believe in herself, or believe in the cause.

Belief plays a huge role in the TV show Sleepy Hollow. When Abbie was a kid, she saw a demon and denied it, tried not to believe in it. That damaged her relationship with her sister and ruined a lot of her life. So when she saw a headless horseman kill her boss and father figure she was a little more inclined to go with things. That belief—especially in herself—grows stronger every episode.

In Heavy Metal, the second book in the Goddesses Rising trilogy, belief is difficult for Riley. Her whole life, she thought goddesses weren’t real. That they were shysters or worse. Even when her powers grow strong enough that she can no longer deny them, she has trouble believing she belongs in the Society.
Of course, at whatever level a heroine’s journey exists—save the world or save her heart—she has to have courage. Courage to trust, to accept help, to be independent, or to face demons and dangers.

One of my favorite examples of courage is Ripley (Sigourney Weaver) in the movie Aliens. The very best line in any movie, IMO, is when Ripley gets into the robotic forklift, steps out of the bay, and says to the mama alien menacing Newt, “Get away from her, you bitch!”

All of my goddess heroines have to have courage, but Marley has a really hard time finding it. She puts on a brave face after she screws up, but things just keep getting worse, helplessness and self-blame crushing her self-esteem. It takes a new purpose to turn that around, but still, in Sunroper she has more courage when her life is on the line than when her heart is.
This trait can often be the one that prods a reluctant heroine on the path to the battle. Saving the world is sometimes too abstract. When a heroine’s loved ones are in danger, well, that’s when the ferocity takes over.

Linda Hamilton as Sarah Connor in Terminator 2 takes this trait to extremes. She wants to change the future destined for her son, but everything she does makes things in the present worse. She pushes her son away with her rules and her hovering and her paranoia, and even winds up in an institution. How can she protect him from there?

Protectiveness is what drives Quinn, the heroine of Under the Moon, to go after the leech in the first place. Some might think being a target herself is the driving force, but it’s really her need to make sure no more of her fellow goddesses is harmed.
A softer trait, compassion is vital for keeping a tough, courageous, protective, ferocious heroine from being too hard and unlikeable. She has to care about the people around her—what they’re feeling, what they need.

This is the trait that makes Audrey in the TV show Haven so fantastic. She really wants to help the people who are Troubled, even when their weird issues hurt or kill others. This core trait is also what makes the recent season finale so painful for us who watch the show. (I won’t spoil it, but she’s become the opposite of what we know her to be.)

Compassion is the reason Quinn works for three years to return the stolen power to the leeched goddesses, the reason she’s willing to suffer as Marley’s leeched energy turns poisonous inside her. Compassion is also why Marley secretly tries to take down a rogue goddess by herself.
This is the ultimate heroic trait, in some ways. It keeps heroes and heroines going when things seem hopeless. It keeps teams together when that means sacrifice and pain.

Nikita is all about loyalty. When she turned around and began taking Division down, one of her goals was to rescue those inside who had been made, like her. Over the course of the show, she has others who are loyal to her in return, and that web of loyalty is why they achieve success.

Loyalty is what brings together Quinn and Riley and Marley for the final battle in Sunroper, too. It’s what ties their heroes to them, and it’s also why their job is so hard. Because loyalty isn’t just a heroic trait—the bad guys have it, too.

Your turn! Tell me your favorite heroines and what their defining heroic traits are. And if the Goddesses Rising sound like your kind of books, here’s where you can get them:

This is a great opportunity to start the trilogy (book three, Sunroper release Dec 31)
http://www.amazon.com/Under-Goddesses-Rising-Natalie-Damschroder-ebook/dp/B009G1X1Z0/

She currently lives in Pennsylvania with her perfect partner of a husband and two amazing daughters. Learn more about her at her website. 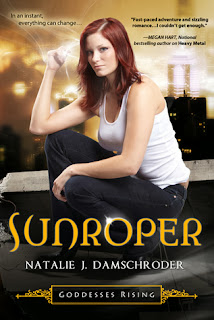 Marley Canton is done being a victim. A year and a half has passed since she discovered her ability to nullify power in those who aren’t supposed to have it. She’s now on a quest not only to stop the brats who’ve become addicted to goddess power, but also to find the source of their addiction.

Like Marley, Gage Samargo is tracking down the goddess who went rogue decades ago. Insane with too much power from the sun, she’s selling that energy to Gage’s younger brother and his friends, who are no longer content to come into power naturally. While they work to find a way to neutralize the goddess, Marley discovers that every time she nullifies someone, she takes on some of the goddess’s insanity.

Gage falls for Marley’s sharp wit and intense desire to right wrongs. But once he discovers she’s turning into her enemy, is it too late to back away? 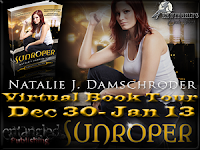