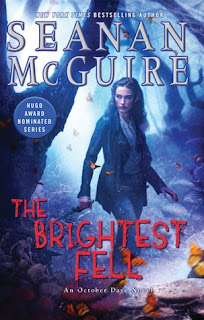 Things are slow, and October “Toby” Daye couldn’t be happier about that. The elf-shot cure has been approved, Arden Windermere is settling into her position as Queen in the Mists, and Toby doesn’t have anything demanding her attention except for wedding planning and spending time with her family.

Maybe she should have realized that it was too good to last.

When Toby’s mother, Amandine, appears on her doorstep with a demand for help, refusing her seems like the right thing to do…until Amandine starts taking hostages, and everything changes. Now Toby doesn’t have a choice about whether or not she does as her mother asks. Not with Jazz and Tybalt’s lives hanging in the balance. But who could possibly help her find a pureblood she’s never met, one who’s been missing for over a hundred years?

Enter Simon Torquill, elf-shot enemy turned awakened, uneasy ally. Together, the two of them must try to solve one of the greatest mysteries in the Mists: what happened to Amandine’s oldest daughter, August, who disappeared in 1906.

This is one missing person case Toby can’t afford to get wrong.

THE FETCH IS ONE of the most feared and least understood figures in Faerie. Their appearance heralds the approach of inescapable death: once the Fetch shows up, there’s nothing that can be done. The mechanism that summons them has never been found, and they’ve always been rare, with only five conclusively identified in the last century. They appear for the supposedly significant—kings and queens, heroes and villains—and they wear the faces of the people they have come to escort into whatever awaits the fae beyond the borders of death. They are temporary, transitory, and terrifying.
My Fetch, who voluntarily goes by “May Daye,” because nothing says “I am a serious and terrible death omen” like having a pun for a name, showed up more than three years ago. She was supposed to foretell my impending doom. Instead, all she managed to foretell was me getting a new roommate. Life can be funny that way.
At the moment, doom might have been a nice change. May was standing on the stage of The Mint, San Francisco’s finest karaoke bar, enthusiastically bellowing her way through an off- key rendition of Melissa Etheridge’s “Come to My Window.” Her live-in girlfriend, Jazz, was sitting at one of the tables closest to the stage, chin propped in her hands, gazing at May with love and adoration all out of proportion to the quality of my Fetch’s singing.
May has the face I wore when she appeared. We don’t look much alike anymore, but when she first showed up at my apartment door to tell me I was going to die, we were identical. She has my memories up to the point of her creation: years upon years of parental issues, crushing insecurity, abandonment, and criminal activities. And right now, none of that mattered half as much as the fact that she also had my absolute inability to carry a tune.
“Why are we having my bachelorette party at a karaoke bar again?” I asked, speaking around the mouth of the beer bottle I was trying to keep constantly against my lips. If I was drinking, I wasn’t singing. If I wasn’t singing, all these people might still be my friends in the morning.
Of course, with as much as most of them had already had to drink, they probably wouldn’t notice if I did sing. Or if I decided to sneak out of the bar, go home, change into my sweatpants, and watch old movies on the couch until I passed out. Which would have been my preference for how my bachelorette party was going to go, if I absolutely had to have one. I didn’t think they were required. May had disagreed with me. Vehemently. And okay, that had sort of been expected.
What I hadn’t expected was for most of my traitorous, backstabbing friends to take her side. Stacy—one of my closest friends since childhood—had actually laughed in my face when I demanded to know why she was doing this to me.
“Being your friend is like trying to get up close and personal with a natural disaster,” she’d said. “Sure, we have some good times, but we spend half of them covered in blood. We just want to spend an evening making you as uncomfortable as you keep making the rest of us.”
Not to be outdone, her eldest daughter, Cassandra, had blithely added, “Besides, we don’t think even you can turn a karaoke party into a bloodbath.”
All of my friends are evil.
As my Fetch and hence the closest thing I had to a sister, May had declared herself to be in charge of the whole affair. That was how we’d wound up reserving most of the tables at The Mint for an all-night celebration of the fact that I was getting married. Even though we didn’t have a date, a plan, or a seating chart, we were having a bachelorette party. Lucky, lucky me.
My name is October Daye. I am a changeling; I am a knight; I am a hero of the realm; and if I never have to hear Stacy sing Journey songs again, it will be too soon.

Seanan McGuire lives and works in Washington State, where she shares her somewhat idiosyncratic home with her collection of books, creepy dolls, and enormous blue cats.  When not writing--which is fairly rare--she enjoys travel, and can regularly be found any place where there are cornfields, haunted houses, or frogs.  A Campbell, Hugo, and Nebula Award-winning author, Seanan's first book (Rosemary and Rue, the beginning of the October Daye series) was released in 2009, with more than twenty books across various series following since.  Seanan doesn't sleep much.