UFI welcomes Author Nancy Gideon. Thanks for Joining us!!

Though I’ve got over 55 books behind me, with each one that comes out, I’m as nervous as a newcomer when they’re released. That’s a secret we writers like to keep to ourselves. Don’t tell anyone!

Hanging out with my critique partners, indulging a Netflix addiction, soaking up Vitamin D therapy with my iPod tunes on my third floor patio surrounded by a jungle of green plants, or just napping with the cats. Life is good! And, of course, reading!

Working up a new project. I LOVE to spin a plot, especially into a series. I’ve been known to completely outline a multi-book series in a couple of hours-even if they weren’t my books!

Oh, yes. OCD. Must have routines! I started out writing by hand in a notebook around two preschool boys’ nap times and now, around a full time job so I’ve always had to make every creative opportunity count. I’m an early riser – 5:00 a.m. with my Keurig coffee and keyboard and a three hour window to get in a chapter. I plot in the car on the way to work and bring home bits of dialog on Post-It notes that have come to me during the day. I write from page one to page end, straight through before doing any revising.

Kresley Cole’s Immortals After Dark (especially Bowen!), Gena Showalter’s YA Alice In Zombieland, Darynda Jones’ Charley Davidson series, and J.D. Robb’s In Death series. Unputdownable! I’m thrilled that Darynda is going to be one of my featured guests at my 4th Annual Haunted Open House and Blog Hop from 10-27 to 10-31!

How would you pitch REMEMBERED BY MOONLIGHT to someone who has not heard of it before?

The series started out as a one book concept, a kind of “Beauty and the Beast meets Goodfellas in the Big Easy” but the characters and expanding world wouldn’t be contained between the covers of just one book. It’s got everything I love to read: preternatural awesomeness, suspense, action, sizzling romance, swoon-worthy Alpha heroes and edgy heroines, and a rollercoaster thrill ride from page one to page end.

The first four “Moonlight” books of the series follow the complicated courtship of Max
Savoie, former mob enforcer and pseudo-leader of a shape-shifter clan, and Charlotte Caissie, a tough-as-nails NOPD detective out to convict Max’s mentor. Then the “Shadows” books expand the world with new H/H characters, clans and intrigues.

REMEMBERED BY MOONLIGHT returns Max and Cee Cee as the main couple and would be a great place for a new reader to learn about the “By Moonlight” world as they follow Max’s journey to recover his memories and his place within that world and with the woman who loves him.

Can you tell us a little bit about the world that REMEMERED BY MOONLIGHT is set in?

The “By Moonlight” shape-shifter world exists under the radar in New Orleans. Think of them as undocumented aliens (REAL aliens!), outcasts without a clan or leader, working the docks, living in shadows, afraid, until the whispered rumor that the Prophesied One who is supposed to free their kind from subjugation to those of a higher species in the North is among them in the guise of dangerous and secretive mobster bodyguard, Max Savoie. Convincing Max to be their leader is another thing altogether since he has no idea of who or what he is, especially when he’s focused on winning over his long unrequited love, NOPD detective Charlotte Caissie. Though each book is self-contained, there’s an over-arcing mythology storyline that connects them all, and recurring characters who help the world evolve in unexpected directions.

Do you have a favorite scene in REMEMBERED BY MOONLIGHT ?

Oh, I couldn’t begin to pick just one. My favorites feature confrontations between Max and Cee Cee where the bantering dialog crackles with sexy innuendo and sass.

Of course Max is my undisputed favorite, but when I introduced Cale Terriot in PRINCE OF SHADOWS, the rowdy, swaggering, tattooed, rock ‘n roll prince had me at the first squint of his eyes. Carrying him over into REMEMBERED BY MOONLIGHT to interact with Alphas Max and Silas MacCreedy was the most fun I’ve had. The hardest characters to write are the kinder, gentler heroines who grew into their own loving their unpredictable males.

I’m waiting to hear on a YA paranormal series that’s out with a NY publisher. In the meantime, I’ve contracted reissues of my backlist with Belle Books. I’ve got four contemporary romances under my pen name Dana Ransom coming out with their imprint Bell Bridge in 2014 (three are already available!) and in 2015, their imprint ImaJinn will be rereleasing my “Midnight” vampire romance series with all new packaging, including the first three books of the series which have looong been out of print (like since the ‘90s!). They’ll come out one per month beginning in March, 2015 for nine consecutive months! I’m also planning to self-publish some of my western historicals now that I’ve gotten the rights back.

Nancy Gideon is the award winning author of over 55 romances ranging from historical, regency and series contemporary suspense to paranormal, with a couple of horror screenplays tossed into the mix.

She works full time as a legal assistant in Southwestern Michigan, and when not at the keyboard, feeds a Netflix addiction along with all things fur, fin and fowl. 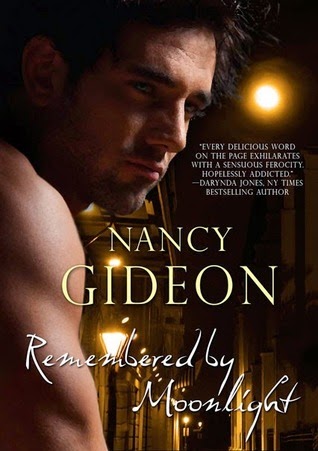 Clever, cool and preternaturally lethal, Max Savoie is leader of a secretive shape-shifter clan, heir to a mobster’s legacy, and the love of New Orleans’ top cop . . . but he can’t remember any of them. The only way to recover his past, and his rightful place in the arms of the woman who risked all to save him, is to surrender to a mysterious visitor who could use him as a weapon against all he’d loved.

After rescuing her mate from his ruthless captors in the North, hard-hitting Detective Charlotte Caissie is now painfully vulnerable—a stranger in his eyes . . . and in his bed. The key to his memories is locked in a tortuous past. To reclaim the strength of their passionate bond, Max must learn to trust her enough to face that darkness at her side before the threat it hides exposes the secret Cee Cee carries.

When an investigation into grisly deaths in an underground Shifter fight club points to more than just dangerous clan rivalries, Cee Cee enlists Max’s help to find a traitor in their midst while there’s still time to turn a deadly invading tide. But the cost of saving their treasured future may mean sacrificing his past. Especially when the enemy they pursue . . . might be Max, himself.

Had she expected it to be easy having him here so close and yet so agonizingly far away? Bad enough watching him in that antiseptic clinic cell, a prisoner of his own panicked madness, raving, raging, out of control. Worse was having him here in the lush, sexy surroundings he’d built for them to share, temptingly near yet impossible to reach.

A bargain made in heartbreak hell.

Though she might be tortured by cherished memories, he was not. She was nothing to him but a protective port in his emotional storm. And that knowledge was driven home like a stake through the heart every time they were together. Every time he stared at her through those cool green eyes without the slightest flicker of response. Every time he took that distancing step back to evade the casual graze of her hand. Every time he lay next to her in the night, and silence created a force field of discomfort.

Tripping over him every minute of the damned day only emphasized how much she wanted, needed him back.