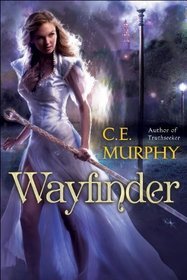 Lara Jansen is a truthseeker, gifted—or cursed—with the magical ability to tell honesty from lies. Once she was a tailor in Boston, but now she has crossed from Earth to the Barrow-lands, a Faerie world embroiled in a bloody civil war between Seelie and Unseelie. Armed with an enchanted and malevolent staff which seeks to bend her to its dark will, and thrust into a deadly realm where it’s hard to distinguish friend from foe, Lara is sure of one thing: her love for Dafydd ap Caerwyn, the Faerie prince who sought her help in solving a royal murder and dousing the flames of war before they consumed the Barrow-lands.

But now Dafydd is missing, perhaps dead, and the Barrow-lands are closer than ever to a final conflagration. Lara has no other choice: she must harness the potent but perilous magic of the staff and her own truthseeking talents, blazing a path to a long-forgotten truth—a truth with the power to save the Barrow-lands or destroy them.

WAYFINDER wrapped the series up nicely. Everyone and everything was led to their conclusion. Lara fights to learn everything she can to master her powers and the staff before its to late. The world that C.E. Murphy has created is complex, well described and full of mystery and danger. I was drawn into the story in TRUTHSEEKER and held until the end of WAYFINDER. All though Lara and Dafydd only knew each other for a short time their relationship was well written and felt real. The action was pretty much constant and the plot moved along at a good pace. Even though the book wrapped everything up nicely I still felt like I could read more at the end. I kinda would like to know what happens next so that is a bit of a bummer. All in all it was a great modern day fairytale. If your looking for something a little different this is a great fantasy for you.