UFI welcomes Author Lisa Shearin. Thanks for Joining us!!

I adore funky, non-precious gemstone, or ethnic jewelry. My husband probably believes I need to be on a 12-step program. I also have an addiction to purses and briefcases. I really shouldn’t be turned loose in the purse section at TJ Maxx without a chaperone—who should also have my charge card—and the ability to keep me from taking it from them by force.

What do you enjoy doing on your downtime?

Downtime? What’s downtime? Well, I do have this thing called “forced downtime,” in which I make time for those pesky life things that get in the way of writing: husband, family, friends, dogs, reading, and sleep. Eating isn’t included since I can do that while writing. In fact, I’m doing it right now.

Unlike many writers, I prefer the rewriting/editing part of writing a book. For me, the first draft is the necessary evil that I have to get through to reach the part I really enjoy. Once I have the entire story down in rough draft form, that’s when I can start to play and have fun; because at that point, I’ve got something to work with.

I write all of my first drafts in longhand, with a fountain pen (bottle fed, not ink cartridges), in journals. My routine is to write at least 1500 words a day, which will give me the rough draft equivalent of two chapters a week. On the weekends is when I type what I’ve written into my computer, making edits as I go. I’ve found that I can’t compose on a computer. My creative brain responds better to the feel of a pen on paper. I’m also a rabid fountain pen collector, both modern and vintage. Needless to say, I love me some eBay, flea markets, and antique shops—which is also another favorite downtime activity.

I cut my novel-writing teeth in the 80s on the books of David Eddings, Raymond Feist, and Terry Brooks. My favorite UF authors now are Jim Butcher, Rob Thurman, and Ilona Andrews. I love reading thrillers that have a hint of the paranormal: The Agent Pendergast series by Douglas Preston & Lincoln Child, the Event Group books by David Golemon, and everything by James Rollins or Jeremy Robinson. My TBR stack is insanely big. Actually, it’s a TBR bookcase.

How would you pitch The Grendel Affair to someone who has not heard of it before?

What would happen if Stephanie Plum went to work for the Men in Black?

Can you tell us a little bit about the world that The SPI Files Series is set in?

Since SPI is a worldwide organization, it seemed natural for me to put their global headquarters in New York. And if supernatural creatures wanted to be among humans, but concealed in the crowds, New York seemed to me to be the perfect choice. But why did supernatural beings come to our world/dimension in the first place? They want the same things as the rest of us: a good job, nice house, 2.5 kids/spawn, and a dog. The others? Well, their powers are stronger here, their greed is bigger, and any treaties or bindings that might have made them behave back home don’t mean squat here. They don’t just want their slice of the American Dream; they want the whole freaking pie, and they don’t care what they have to do, who they have to kill, or how many city blocks they have to level to get what they want.

Someone has to even the odds.

Do you have a favorite scene in The Grendel Affair?

There’s a scene set in Brooklyn’s Green-Wood Cemetery where Mac is on a tractor/snowplow pursuing an elderly hired assassin who looks like the queen of England and is driving a Buick.

As with my Raine Benares books, some of my favorite characters have been members of the “supporting cast.” Two of my favs from The Grendel Affair are Yasha Kazakov and Kenji Hayashi. Here’s the intro copy for them from the book from Mac’s POV:

Yasha was one of SPI’s drivers and trackers. In a city where at any given time there were more upernatural baddies than available parking spaces, having a reliable drop-off and pick-up guy was a necessity. Even better was one who had no problem with turning a rampaging monster into a hood ornament. And should a simple collar turn into a cluster, Yasha was always more than happy to take the fight beyond the driver’s seat— especially during the full moon.

Yasha Kazakov was a werewolf.

Kenji Hayashi was SPI’s resident tech geek. He was also an elf. I didn’t know if he was half elf/ half Japanese human or all Japanese elf. Heck, I didn’t even know Japan had elves, and I didn’t know Kenji well enough yet to ask. Some supernaturals could be even more sensitive and PC about those things than humans. Multi-cultural was one thing. But multi-​species? Not sticking my foot in my mouth would be next to impossible, so I had kept it shut on that topic.

What I knew for sure was that if information was buried deeper than a politician’s past or encrypted six ways from Sunday, Kenji was the go-to guy to dig it out and make it sing. During his in-office hours, he was surrounded by computer screens directing teams of monster-hunting agents. He did exactly the same thing in his off-duty time, only then it was called gaming. Not being a gaming, anime, or comic aficionado, I didn’t recognize most of the figures and toys on every exposed surface in Kenji’s workspace, but there were two that I did—a foot-tall Godzilla complete with glowing red eyes, gripping a headless Jar Jar Binks action figure. The head was in Godzilla’s mouth. It was my favorite.

Growing up in a family of pirates, Raine was a trained fighter both hand-to-hand and with various weapons. Makenna Fraser is a small-town girl from the North Carolina mountains who is now living and working in New York. While one of her 16th birthday presents was a shotgun (the other was a muscle car), she’s used to hunting things that she intends to eat—not defending herself against things that intend to eat her.

A lot of my readers have told me that they miss Tam from my Raine Benares books. I miss Tam, too. Once I put the second SPI Files book to bed (The Dragon Conspiracy, which I’m writing now), I intend to write an e-novella of events that were hinted at in Magic Lost, Trouble Found, but never explored—how exactly did Raine and Tam meet, and what happened when they did? And bear in mind that this story happens pre-Mychael—so anything goes. ; )
__________________________________

Contrary to popular belief, most authors do have day jobs just like everyone else. Lisa’s happily freelancing for an advertising agency as an editor and proofreader. In her previous corporate life, she’s been a magazine editor, advertising copywriter, and writer of corporate marketing materials of every description.

Lisa is the national bestselling author of The Raine Benares novels, a series of six comedic fantasy adventures. Her next series—The SPI Files—is an urban fantasy that’s been described as Stephanie Plum meets Men in Black. It will debut on December 31, 2013.

Lisa is a voracious collector of fountain pens both vintage and modern. She lives in North Carolina with her husband, two spoiled-rotten retired racing greyhounds, and a Jack Russell Terrier who rules them all. 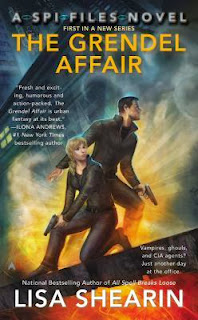