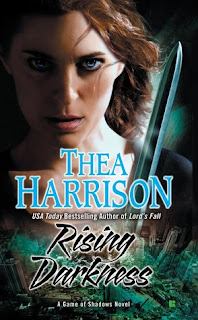 In the hospital ER where she works, Mary is used to chaos. But lately, every aspect of her life seems adrift. She’s feeling disconnected from herself. Voices appear in her head. And the vivid, disturbing dreams she’s had all her life are becoming more intense. Then she meets Michael. He’s handsome, enigmatic and knows more than he can say. In his company, she slowly remembers the truth about herself…

Thousands of years ago, there were eight of them. The one called the Deceiver came to destroy the world, and the other seven followed to stop him. Reincarnated over and over, they carry on—and Mary finds herself drawn into the battle once again. And the more she learns, the more she realizes that Michael will go to any lengths to destroy the Deceiver.

Then she remembers who killed her during her last life, nine hundred years ago…Michael.


I will start by saying that I really like the cover, it is the main reason I wanted to read about RISING DARKNESS. Mary thinks she is going crazy when she dreams about creatures and events and hears voices in her head. When her house is burned down and people try to kidnap her she is sent scrambling to find out what is going on by getting to the woman who appeared to her in a vision that says she can help.

RISING DARKNESS started off a bit fast. The pace is constant and information and events are kind of thrown at you leaving you trying to catch up behind it. It eventually slows down but you will need to stick it out for a bit coming in. Mary has never been able to feel normal or like she fit in anywhere. She tried marriage but her husband ended up being gay and she was relieved because she wasn't interested in having sex or being romantic. Michael has known who he was from a very young age and has searched for Mary ever since. They are soul mates in every way possible and have gone through life after life being together and being ripped apart. Their connection is obviously strong and even before Mary knows who she or Michael is she is highly attracted and drawn to him. They are pretty steamy together and fit together nicely. To be honest I still don't fully understand the creatures they used to be but I'm interested in learning more about them and seeing what happens next.

As I said before you might not connect to the story at first but if you stick it out I'm sure you will catch up and enjoy it like I did. There is a lot of information given in RISING DARKNESS and you can tell that there will be a lot more to come. I do hope that the main characters stay Mary and Micheal as there is so much more about them that I think we need to know and no other main character types were introduced. I would hate to have to learn about 2 new people when the next book came out. Fingers Crossed.