UFI welcomes Author Rain Grey. Thanks for Joining us!!

I love everything cultural from going to the theatre to watching ballet.

I love shopping and reading.

I usually work early in the morning.

I love Anne Rice and anything written by Amanda Hocking

How would you pitch Vampire Creed to someone who has not heard of it before?

It is a story about an ordinary girl who makes a courageous decision.

Can you tell us a little bit about the world that Vampire Creed is set in?

It is set in modern times and because of this the characters face similar challenges to the kind we face.

Do you have a favorite scene in Vampire Creed?

I love the scene when she dreams about she and Blaine playing on the beach with their child.

I like the character of a woman who is accident prone whom I am writing about now.

Rain Grey is a psychologist by profession. However, she has been writing books since she was fifteen years old. She loves anything supernatural and her favourite genres are vampire Romance and ghost fiction. Her home in England is close to the town of Stratford Upon Avon, where William Shakespeare was born. 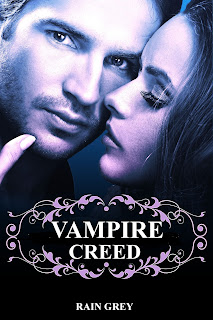 
Barnaby Blaine Rice was a Vampire born in the depression with a very special power to see who people truly were. After a long, empty existence of witnessing the darkest points of humanity, Blaine happens to encounter a beautiful married woman named Mary Slate. Unable to handle his love for the beautiful human, Blaine accidentally kills another Vampire over her and is put under a serious debt with the Vampire Council.

Blaine reluctantly forces himself to forget the woman and allows her to live her life without his intervention. It wasn’t until 50-years-later that the distant memories of the captivating Mary are brought back to the surface. Blaine has the pleasure to encounter the young Wendy Slate, granddaughter of Mary Slate after a criminal vampire keeps her hostage. Blaine got there in time to stop the criminal, but not to stop the beginning of Wendy’s transition into Vampirism.

As he was forced to sire her into this new world, he discovers that Wendy is the most amazing person he’d ever met. Wendy has to make a life-altering decision as Blaine has to deal with his blooming feelings for a woman who was identical to his first love. This modern love story introduces the most influential turning point of these lover’s lives.


There was nothing quite like walking along the salt withered boardwalk of Oceanside Wharf. The unsteady sea roared to my left. The waves were nothing but a dark blur on the horizon that eventually licked the corners of the sandy beach. The lack of seagulls, the cloudy sky, and the stillness in the air told me one thing; there was a storm coming. Usually, these walks by myself were the only way that I could relax after a long day, but tonight was different. Despite the buzzing, yellow streetlamps that hovered over my head, everything about the atmosphere just seemed so much darker than normal.
Everything was ordinary that night, but it seemed too ordinary. Something about the way that my feet padded against the wood seemed to sound too familiar. Something about the way the salty air smelled seemed too perfect as if it were manufactured in a perfume bottle. I ached to see the stars through the cloud cover, but something told me that those wouldn’t look right either. The cold air whipped my long hair around my face, causing me to wrap my arms even tighter around my torso. This made me feel a tiny bit more secure, but I couldn’t deny the way my heart pounded in my chest.
I walked this route every day after my night classes; it was my daily routine. I couldn’t put my finger on it, but something didn’t seem right. My skin broke out in a layer goosebumps that I couldn’t get rid of, no matter how hard I rubbed my arms. The hair on the back of my neck stood up on end. My eyes were peeled for some type of disturbance in the normality of my walk, but I couldn’t find anything. I found myself peeking over my shoulder every so often, but I found nothing but an empty, dimly lit street and a growing distance from the brightly lit university.
These walks had grown more and more intimidating since I first met him. He came to the roller skating rink one night while I was working at the concession stand. We were pretty slow considering that the rink was rented out for a few child’s birthday parties. Every so often, a kid would ask for some candy, but I mostly spent the night leaning against the counter, blankly staring into the rink. That was when I first saw him, standing on the other side of the rink. He was wearing sunglasses inside, which I thought was extremely weird considering that the sun went down at least an hour before he arrived. He didn’t skate and he didn’t talk to anyone. I assumed he was there to watch the kids, but his sunglasses made it hard to gauge what exactly he was staring at. He was so still as if he were able to lock his muscles in position. It made me uncomfortable, but then again, a lot of things made me uncomfortable.
It didn’t become an issue until two women approached me at the stand.
“Excuse me?” The smaller one pulled me away from my thoughts.
“Hello ladies,” I put on my best customer service smile.
They both smiled politely before the plump one spoke, “We have a problem.”
“Yes?”