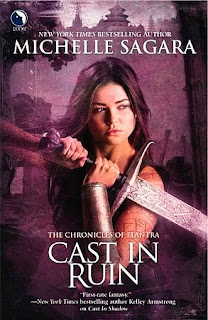 
Seven corpses are discovered in the streets of a Dragon's fief. All identical, down to their clothing.

Kaylin Neya is assigned to discover who they were, who killed them—and why. Is the evil lurking at the borders of Elantra preparing to cross over?

At least the investigation delays her meeting with the Dragon Emperor. And as the shadows grow longer over the fiefs, Kaylin must use every skill she's ever learned to save the people she's sworn to protect.

Sword in hand, dragons in the sky, this time there's no retreat and no surrender..

CAST IN RUIN was packed with events like all the other books in the Chronicles of Elantra series. Kaylin is stuck with more lessons from a dragon that doesn't particularly like her. She gets a bit of a side break by helping solve the murders of six identical corpses that are found in the fief of Tiamaris.

I understand the issues that holds Kaylin back but I am so frustrated with her lack of relationship with Severn. They are totally made for each other in my opinion and I want them to at least kiss or something. lol. I feel so bad for Kaylin with the way she is always treated. She has saved the day per say so many times but people still treat her like she has no idea what she is talking about. There is a new character that I loved from her appearance that seems to feel the same way as I do and I am excited to see her in action in future books on Kaylin's side. We didn't see a lot of Nightshade in book 7 but a deal he makes with Kaylin's superiors seems to make it clear that he will be a big part of the next book as long as he gets his way. I enjoyed CAST IN RUIN, there was plenty of action, plenty of mystery and investigating and plenty of development between the characters. CAST IN PERIL is scheduled to come out in Fall of 2012.