UFI welcomes Author Cassandra L Shaw. Thanks for Joining us!!

Do aliens live on Earth?  And I don’t mean people who you think look or act like aliens, I mean sentient species from other planets and or galaxies or maybe dimensions. Personally I haven’t met any or if I have they haven’t said, hi my name is X and I’m an alien from the planet 8 giving me a heads up.

I met a lady last year who told me she’d not only seen and met both aliens and vampires, she’d communicated with them—here on Earth. She’d seen them in the dimension between the one we reside in and in ours. That they co-existed on Earth in our time merely eking out their life in a different space but they could cross over as the dead can. She might have taken hallucinogens for this experience but she admitted nothing.

I met her at a cheese making workshop, a pretty good way of meeting diverse people that’s for sure, but then I love diverse and the weird. The woman is well-travelled, highly educated, and a humanitarian who runs a non-profit business helping communities who live in socio-economically challenged areas to understand, prepare and eat a balanced nutritious diet by making the most of what is available in each locale. So, a truly decent human.

With a completely straight face and without an ounce of laughter in her voice, she told me vampires cross over that dimensional threshold to suck our life force. Not blood, but our energy.  So basically we are batteries and they are flashlights forever needing a recharge. And I thought life was draining enough or maybe my life force is tasty and they keep visiting.

Aliens eat different sources of sustenance but mostly things we would recognise as food.

Since I’ve not seen or met anyone or thing I would consider an alien or vampire I’ll keep my opinion of their existence in the, I’ll wait to till I see it, side of belief.

In Twin Flames I didn’t write about a race of people I’d met but imagined there are aliens that live on Earth and arrived here 500 years ago. They are worldwide, have a large population, and have in the past and continue to have their haters.  Though they are a sub-species of human, eons ago they crossbred with a creature that wasn’t fully human. There was just enough to make them the offspring a genetically viable (able to bred) sub-species and so as time moved on the Eli and Crea evolved. 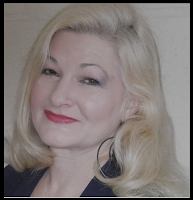 Cassandra L Shaw writes Urban Fantasy, Paranormal Romance, Romantic Suspense, & Contemporary Romance. She lives in a small farm on the Sunshine Coast of Australia. Her eclectic past includes fashion design, environmental science and years of drudgery as an office worker where she dreamed of NOT being an office worker.  She discovered writing a few years ago and has decided that with its mix of art, writing craft, and study she’s at last found the career that suits her arty and academic mind. 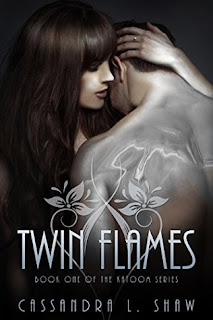 
She’s in grave danger, but she doesn’t want his protection…

After a long and bitter world-war for pure human supremacy, humans and two sub-species the Eli and Crea reside on Earth in an uneasy harmony. One morning on a jog, Bliss Jacobs finds a murdered fellow Eli. She scents the killer on the body, but other evidence is washed away by a savage storm, leaving Bliss as the sole witness and the target of an assassin—and forcing her back into the world of the man who shattered her heart.


He believes she is his destined mate, but he knows there are no second chances…

Kaid Sinclair is chasing more than his best friend’s murderer. He wants Bliss in his bed and in his life, but after their relationship went south several years ago, he knows he has to tread carefully. So how can he keep her safe, while still proving to her that they are destined to be mates, and he doesn’t just want to control her? All he wants is for her to be safe—but with a killer who sees her as Kaid bait, Kaid may have to choose…his life or hers?


The assassin grunted, dropped the body, and then watched it roll and sprawl on its back. Empty eyes stared at the dark and cold Montana spring night sky. The assassin laughed.
He’d killed him.
He scratched at the chemical reactive burning inside his robotic chest. Hissed at the scald of the toxins pulsing in his neck and right arm veins. Silver and the metals that only resided in Eli—a race of humans who, along with the Crea, had taken refuge on Earth five hundred years ago when their own planet Ecreal died—merged with the contaminants in his body with caustic results.
At his veins, the silver he should see as a fine bright line, pulsed dull bronze—aged, corroded, diseased. The toxins tasted of rusted steel and burned his mucus membranes.
He kicked the body. “Fucker.”
Retribution was sweet, even if it had taken him fourteen years. He’d removed the male’s clothes so the trains and wildlife could more easily eliminate his father’s killer. No remains, no ritual burial. Sinclair deserved no such honor.
Here the body would be hacked into easy to eat pieces for the animals to feast on and, since nobody ever came near these tracks, Sinclair’s remains would never be found.

Sins of the Warrior (Grigori Legacy #4) by Linda Poitevin
Happy Reading!!
Posted by StacyUFI at 2:30 AM No comments: