UFI welcomes Amber Lynn Natusch Author of The Caged Series. Thanks for Joining us!!

When I was asked to compose a guest blog post, I had no idea what to write. As an author, it was an especially low moment. Then a great friend suggested that I take an excerpt from the first novel in my series, Caged, and explain what I loved about it. Genius! Times like this illustrate my need for a team of levelheaded people around me―an entourage of rational thinkers.

The unfortunate reality for me was that my favorite scenes from Caged all contain spoilers, but I still managed to find some good ones :)

For this blog, I chose a scene that highlights one of the two mysterious men that Ruby finds herself caught between. They both have alluring qualities, but are equally shrouded in lies, leaving Ruby to sort through them on her own. Getting a straight answer is completely out of the question as you will soon see.

Without further ado, I give you Ruby, Sean, and Eric, in the notorious club scene.

His face was close, breathing my air.  Every time I made eye contact with him, I lost myself in the most literal sense.  I said things I'd never said before, and did things I would never have done; I was a completely different person.  I was so influenced by his energy, his power, as if it was seeping out of him and into me.  I knew I could sense the feelings of others as well as I could my own, but this was entirely different and new.  The feeling was heightened exponentially with eye contact so I tried my best to avoid it. I did an amazingly poor job of it.

I heard a voice from behind me but didn't acknowledge it until a hand clamped down onto my arm and jerked me around in a not-so-friendly way. Sean's look was murderous.  He was visually communicating his desire to creatively remove certain body parts from the guy he'd just peeled me off of, making sure the process was intolerable.  There was something personal about his stare, like the two had been at a crossroad before.

"Do you two know each other?" I asked, not really expecting an honest answer. I needed to diffuse the situation before the pissing contest got any more heated.  The man laughed and said nothing.  I abruptly turned to look at Sean, not sure how he would react to the man's expressed humor with the situation. He did nothing but stare him down.

Sean's emphasis on the word "him" seemed strange, but so was Sean sometimes.  I shrugged as I audibly exhaled.  Boys can be so trying sometimes.

I looked back at the man causing such a clear air of tension between them. I wanted to know who he was.  However, as soon as I looked at him I no longer cared, I just wanted to be with him regardless of the cost.

"I'm Eric," he said without being prompted.

"Ruby," I managed as I struggled against Sean's very strong grip to get closer to Eric.

"We're leaving," Sean stated as he whirled me around and marched me towards the door.  My feet barely made contact with the floor and I realized he'd picked me up around the waist to drag me out of the dance hall.  Eric followed closely behind with a wickedly amused look plastered all over his face.  The situation was more personal than either of them was letting on and I was furious at being in the dark about something that so clearly involved me.

Sean stomped through the lobby, pushing through innocent club goers with no regard.  As we broke through the front door, Eric slipped a small piece of paper into my hand as Sean continued on towards the parking lot.  He didn't see me take it so I managed to quickly slip it into my shirt and down my bra even with the restricted range of motion I had in my arm. I doubted that Sean would strip search me to find it even if he had seen what I did.  Eric slipped out of sight into the bar while I continued to be hauled away like luggage to the car.

"I'm quite capable of walking, you know," I said with as much ferocity as I could muster.

"I've seen what you're capable of tonight," he scoffed.

"Why are you so angry with me?" I asked trying desperately to figure out what offense of mine he'd suffered.

"It's nothing," he answered.

"Nothing?  This is how you act about nothing?  Remind me never to do something to you then, because I shudder to think what your reaction would be to that," I said, trying to wiggle away from him.

If you’re dying to know more about me, allow me to put you at ease. I’m a sharp-tongued, sarcastic cancer, who loves vegetable smoothies, winter storms, and the word portfolio. I should NEVER be caffeinated, and require at least eight hours of sleep to even resemble a human being. At thirty-four, I just now feel like I can keep a straight face while saying the word “rectum” (which is actually a huge lie because I just laughed out loud while reading this to my husband). I live with my iPod firmly affixed to my body, drive too fast, and laugh/cry at inappropriate times. 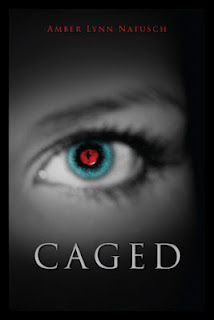 I stood in the middle of the room, unmoving – I barely breathed. My life had just become surreal, impossible, and one enormous lie. I needed to go, to run somewhere, anywhere to beat back the reality that was rapidly closing in around me. The image of him was burned into my retina, flashing over and over again like a warning. He was trapped somewhere between human and decidedly not, and I realized that was my new reality.

After the death of her parents, Ruby awakens from a lifetime of shadows and finds herself alone, thrust into a world of lies, deceit, betrayal and the supernatural.

As her quest for truth continues to come up short, she realizes that maybe some questions really are best left unanswered.

When her true identity is finally unveiled, she is forced to choose between two of the mysterious men who continually seem to crop up in her life.

Now abandoned, Ruby must learn to call on the darkness within to survive, or spend a hellish eternity imprisoned because of it


*Minor Spoilers may be revealed*

I jumped into Caged not knowing what it was really about and had no clue it was a werewolf story. The story starts off a bit slow with information, You get through about half the book before any hint of the paranormal is even mentioned then BAM your thrown right in to everything and things start to make more sense.

Ruby is frustratingly naive when it comes to most matters. She is quick to jump to the worst conclusion but also quick to double guess herself. She hides behind humor and is quick with her comebacks. I found her to be real and easy to connect with. Her entire story is heartbreaking and compelling. She makes the story more real with her emotions and it becomes impossible to put the book down once you get into it. The men of the story aren't always straightforward and its hard to see where they stand and if they are trying to help or hurt Ruby. Having said that I liked Sean from the moment his character was introduced and I could tell Eric was nothing but trouble.

The only thing that I did not care for in CAGED had to do with the play out from after Ruby was "caged". I was glad we didn't "witness" what happened to her, we got many hints but no solid confirmation until the end of the book. I would have thought she would have been a tad bit more traumatized but maybe the trauma from it wont show up until book 2 as a lot happened afterwords and she really didn't have much downtime.

Amber definitely knows how to write my brand of book crack.I really enjoyed CAGED and am really excited to find out what will happen next.

Anything But Ordinary by Lara Avery
The Blinding Knife (Lightbringer, #2) by Brent Weeks
The Curse (Belador, #3) by Sherrilyn Kenyon
Fang Girl by Helen Keeble
Full Blooded (Jessica McClain, #1) by Amanda Carlson
Hanging by a Thread by Sophie Littlefield
Hidden (Firelight, #3) by Sophie Jordan
The Brides of Rollrock Island by Margo Lanagan
Unspoken (The Lynburn Legacy, #1) by Sarah Rees Brennan
Vessel by Sarah Beth Durst
The White Forest by Adam McOmber