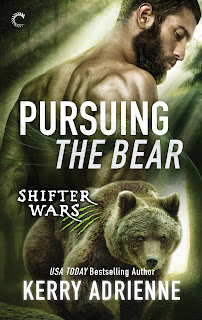 Bear shifters exist. Professor Bria Lane has known this since she was a child. Now she's returned to the forests of Deep Creek to prove it to the world. She has no idea how close she is to that proof in ruggedly sexy park ranger Derek Poole. Intimately close. But uncovering Derek's wild side comes with a shattering price.

Like a magnet meeting metal, Derek is drawn to Bria. His destiny. His mate. So beautiful and so vulnerable. So dangerous, too: an encroachment of lions, vengeful and vicious, is closing in and they're ready for war. Now is not the time to be distracted like a lovesick cub.

If Bria reveals the truth of the Deep Creek shifters to the world, she'll bring out the worst of both sides. But Derek can't hide his secrets from the love of his life forever. He knows they're playing with fire—and that when passion runs this hot, this reckless, someone's bound to get burned.

“What an ursus…umm...whatever you said? I’ve always worked with my hands—I never was a college guy. Didn’t have the patience to sit still in the classroom.” Derek kicked at the ground then looked up.
“No worries.” She snapped her attention back to what he was saying. “Most people don’t know what an ursinologist is—it’s someone who studies bears.”
“Bears, huh?” He shook his head and laughed. “You study bears?”
“What’s so funny?” She crossed her arms. “It’s a valid profession. And I’m doing what I love.”
“Nothing wrong with it, Bria.” He stepped so close to her she had to look up to meet his gaze, and held his hands up in mock surrender. “I think it’s a fine profession, I’ve just never heard of it. It’s a totally new job that I’ve never heard of. Yet here you are in the woods with me, so I guess we aren’t that far apart, career-wise.”
Derek was in her space and even though they weren’t touching, she felt his presence touching hers, like a low-level energy buzzing in the evening air, crackling when hers met his. One step closer and she could pull that hair band out and hop into his arms, straddling him as she kissed him. She shook her head to clear her naughty thoughts. Ugh. Stop. The thoughts about what she’d like to do to the hot park ranger needed to stop. Maybe she’d been out in the sun too long. Normally she didn’t ogle guys. In fact, she couldn’t remember the last time she had. She cleared her throat and took a step back. “I thought you were laughing at me.”
“No. I didn’t know there was a name for someone who studies bears. Plus, the word sounds kinda funny.” He scanned the forest, thumbs in his belt loops. “I guess you’re in the right place to look for bears, though. Especially this deep in the forest. Lots of them live in Deep Creek. They’re everywhere. Probably closer than you think.”
“I hope so.” Her shoulders lowered and she blew out a breath. “Have you seen any this season? I know they are more active in summer. After they’ve woken from hibernation.”
“I see them every day. I’m out in the woods a lot.” He chewed his lip. “They really only partially hibernate, though. But yeah, I guess you could say I’ve seen a lot of bears here in Deep Creek.”
He’d seen bears. Recently. Her pulse thumped in her neck and she leaned forward, as if being near him would make the bears closer. Excitement rang in her ears. “Where? Can you show me, or at least give me some pointers where to look? I can’t wait to see them.”
“My best advice is to keep your eyes open. You never know when a bear will appear right in front of you.”
***Excerpt provided courtesy of Kerry Adrienne and Carina Press.  This excerpt is from an unedited ARC and subject to change. 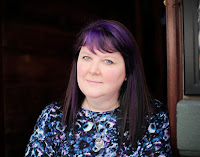 Repped by the fabulous Marisa Corvisiero with the Corvisiero Literary Agency. http://www.corvisieroagency.com/
Kerry loves history and spends large amounts of time wondering about people who lived and walked on Earth in the past. She’s a mom to three daughters, six cats, and various small animals. Her husband says she’s a marketer’s dream, as she often believes everything she hears—at least initially. Her shoe horde will attest to her fine shopping skills.
In addition to writing, Kerry loves to sew (costumes and cosplay, especially), draw, paint, make chainmail, and play guitar.
Her new love is her Mini Cooper Convertible, Sheldon, and they have already gone on many adventures. They travel to as many concerts as they can–especially Green Day and Marilyn Manson.
You can visit her much-neglected costuming blog here: http://cloakandcostume.blogspot.com/ Maybe she’ll have time to update it soon.