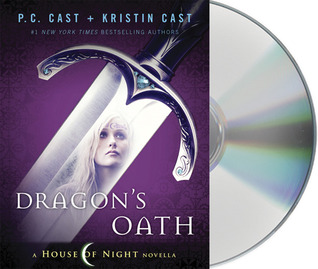 The first in an enthralling new mini-series of novellas from the #1 bestselling authors of the House of Night, Dragon’s Oath tells the story behind the House of Night’s formidable fencing instructor – the love that will transform him, and the promise that will haunt him
In early 19th century England, long before he’s a professor at the Tulsa House of Night, Bryan Lankford is a troublesome yet talented human teen who thinks he can get away with anything… until his father, a wealthy nobleman, has finally had enough, and banishes him to America. When Bryan is Marked on the docks and given the choice between the London House of Night and the dragon-prowed ship to America, he chooses the Dragon – and a brand new fate.
Becoming a Fledgling may be exciting, but it opens a door to a dangerous world.... In 1830’s St. Louis, the Gateway to the West, Dragon Lankford becomes a Sword Master, and soon realizes there are both frightening challenges and beautiful perks. Like Anastasia, the captivating young Professor of Spells and Rituals at the Tower Grove House of Night, who really should have nothing to do with a fledgling…
But when a dark power threatens, Dragon is caught in its focus. Though his uncanny fighting skills make him a powerful fledgling, is he strong enough to ward off evil, while protecting Anastasia as well? Will his choices save her—or destroy them all?

My first experience with an audio book was a few weeks ago and I immediately found it interesting to hear the different emotions and scenes played out in someone else's voice. Starting with what I thought of the audio version of DRAGON'S OATH I can honestly say the speaker was very pleasant to listen to. I was able to understand everything while she was reading and was able to picture what she was saying.

I have enjoyed most of the books in the House of Night series. I feel that some of the the conflicts are starting to drag on a little to long though so it was nice to get a little breather and learn a bit about Bryon "Dragon" Lankford and Anastasia. The Novella was fast paced while it takes us on a short journey of Dragon and Anastasia's love that really helped bring me closer to these two background characters. This was a great little read (or should I say listen) and I'm glad I was able to add it to my House of Night knowledge.

Winner will receive
- One Audio Copy of Dragon's Oath

RULES
1)  Tell me what your favorite House of Night novel is. =)
2) This giveaway is open to US followers only
3) Must leave an email address so I can contact you.