Winner: Bleeding Out by Jes Battis

Prize: Print copy of Bleeding Out

The Winner chosen by Rafflecopter is.....
a Rafflecopter giveaway
Congrats!! I have emailed winner who has 48 hours to respond with mailing address or I will pick another.
Posted by StacyUFI at 9:00 PM No comments: 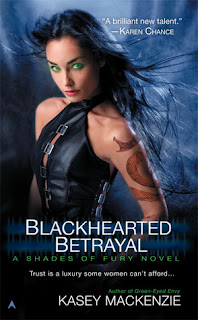 Riss Holloway has taken a leave of absence from her mortal job as Boston’s Chief Magical Investigator to focus on an unsettling friction brewing in the Sisterhood—only to be ushered into a tumultuous civil war drawing every other god and goddess into the chaos as well.

I really love all the covers of this series. Riss's leave of absence doesn't end up going so well. There is actually a line in the book that explains it best, She is now taking a leave of absence from her leave of absence. I was looking forward to seeing Riss with her niece now that she is a fury so I was kinda sad that that was put off until later.

Riss and Scott are still very much together and happy, they don't really have any alone time with each other but they are still a great team and still growing their relationship together. There was a lot more mythology added into book 3, more gods and goddesses are introduced into the book and new situations fill the pages. I expected the bad guy to go down at the end but I was totally shocked by all the events that made it happen and the outcome of Marissa completing her task. I know that the new situations certain people find themselves in at the end of the book will bring plenty of action and excitement in future books.

Like the other book in the Shades of Fury series BLACK-HEARTED BETRAYAL is filled with action and suspense. Riss and her allies hardly have room to breathe before the enemies are on them again. I thought that there was a lot more brought to the table compared to book 2 and I hope that it continues with book 4.