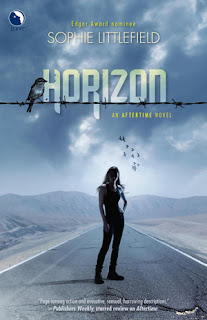 Cass Dollar is a survivor. She's overcome the meltdown of civilization, humans turned mindless cannibals, and the many evils of man.
But from beneath the devastated California landscape emerges a tendril of hope. A mysterious traveler arrives at New Eden with knowledge of a passageway North—a final escape from the increasingly cunning Beaters. Clutching this dream, Cass and many others decamp and follow him into the unknown.
Journeying down valleys and over barren hills, Cass remains torn between two men. One—her beloved Smoke—is not so innocent as he once was. The other keeps a primal hold on her that feels like Fate itself. And beneath it all, Cass must confront the worst of what's inside her—dark memories from when she was a Beater herself. But she, and all of the other survivors, will fight to the death for the promise of a new horizon….

At the end of REBIRTH I was extremely angry at Cass for what she was doing with Dor. I really liked Smoke and hated her self destructiveness that led to the whole sticky situation. After finishing HORIZON I see that it was the best thing that could have happened to her.

HORIZON takes place a few months after the end of REBIRTH. Cass, Ruthie and all the others that she came with have settled into community of New Eden. Things are going well besides that fact that Cass started drinking again (lightly) and she doesn't feel like she really fits in. Behind the curtains Cass has continued her affair with Dor and they cant seem to stop themselves from being drawn to each other. Just when Cass realizes she really wants to be with Dor, Smoke wakes up confusing Cass even more. The Beaters are changing and getting smarter some how and the island becomes unsafe.

There are some new characters introduced. The one that sticks out the most is Red. I wont tell you much about him because that would be some major spoiling but I must say that Red was the absolute last person I expected in the story but he fit in extremely well. There is a lot of sacrifice and soul searching in HORIZON. There is a lot of loss and death. The emotions hit an all time high at the end of the book and I was shocked that it went where it did but it really did make sense when all was said and done. Cass is an extremely broken character and goes through a lot but I like that Sophie doesn't magically "fix" her. She ends up in a good place but she is still flawed and broken inside just happier and in a better place. I would actually love to read more about Cassie in the future I think her story is far from finished but if this is the last book then I could be happy at where it all ended.

The Aftertime series has definitely been a hit for me and if you like Dystopian or zombie books, this series should be on your bookshelf.