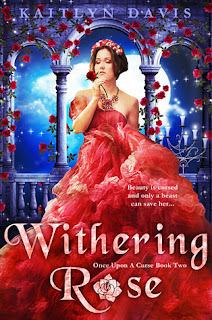 
What if Beauty was cursed, and the Beast was the only one who could save her? Don't miss WITHERING ROSE, a dystopian romance from bestselling author Kaitlyn Davis that reimagines the classic fairy tale of Beauty & The Beast.

"As the heat finally disappeared, I felt the bloom blossom in the very core of my soul, a rose just like my name--a ticking clock hidden behind a façade of beauty. From that moment on, my life would become a countdown, and all I could do was wait and watch as the petals of time slowly started to fall."

Omorose Bouchene has a secret--magic. There's only one problem. At the age of seven, an earthquake struck, catapulting her into a new world. A land made of skyscrapers and cell phones. Fast cars and fluorescent lights. A land where magic isn't supposed to exist and anyone who wields it is the enemy.

But after ten years of hiding, she's desperate to find a place where she can be free. Because all magic comes with a curse, and her curse is time--every ounce of power she uses strips days off of her life. The clock is winding down, and the only option left is to escape to the realm of the Beast. But the king of monsters isn't what he seems. And the more Omorose opens her heart, the more she comes to realize that the only person she may need to fear is herself.

*This is the second book in Once Upon A Curse, a series of interconnected stand-alone novels all set in the same fantasy universe.


I didn't fall in love with GATHERING FROST, but I liked it enough to be interested when I saw that WITHERING ROSE was available for review.

Davis introduces a new take on Beauty and the Beast in WITHERING ROSE. Omorose is from the magic side of things and is forced to keep her magic under lock and key to keep herself safe, but she can't do it anymore and heads to the only place she can think of that will let her be herself, the realm of the Beast. I found Omorose very determined despite her fears. She didn't give up and didn't let herself be pushed into doing things even though it would have made things easier. Cole was pretty gruff, but quickly grew on me. He is very protective of his people and Omorose quickly become one of them and more to him. Together the pair fit and complimented each other. The romance was sweet and the relationship ended strong.

Some will be happy to know that Jade and Asher from book one made an appearance in WITHERING ROSE. Those that know my reviews know that I love seeing past main characters throughout a series. Book three—which will be a Cinderella retelling—will feature someone related to Omorose, so I hope that we get to see all of the characters together at some point during it. I enjoyed WITHERING ROSE more than I did GATHERING ROSE and I hope that book three brings my enjoyment up even more.