Early Review: This Weakness For You by Wendy Sparrow 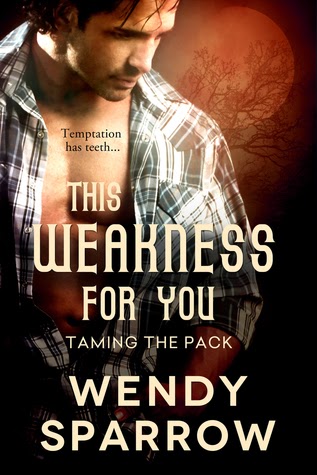 
She's exactly what he wants to sink his teeth into...Jordan Hill is his pack's Alpha. The Big Bad Wolf. And after his last breakup, he's opting to be the lone wolf, too. But then his rival's little sister—a human, of all creatures—comes to his door. And suddenly, what should be a tasty little snack turns out to be something more than Jordan could ever imagine...Christa Hansen  is simply looking for a place to stay. Yet the dark shifter smells irresistibly like forever. But getting involved with the wolf who tried to kill her brother—twice—is lunacy. Besides, in the unforgiving, shadowed world of shifters, there is no room for weakness. And falling for her family's enemy won't just be her downfall...it will be his, too.


If you've read PAST MY DEFENSES you know a little about who these two characters are. We met Christa very briefly when she picks up her cat, Lucifer, from her brother Dane's house and we got to know Jordan a little more in-depth since he's the alpha of the pack and helped the previous characters out quite a bit.

I found it hilarious that Jordan's new mate turned out to be not only human, but also Dane's little sister. Out of all the people in the world it could be to have it be Christa is just pure awesomeness.  I enjoyed Jordan's character before book 2 so it wasn't hard to be excited to read more about him. We find out pretty quickly that Christa has multiple sclerosis and knows nothing about shifters. She might be sick but she is still pretty darn kick butt. She fits right into being the alpha female and she proves herself many times.

The relationship between the two was pretty fun to watch. Christa from the beginning wants to know more about Jordan and be involved in his life. She of course has some reservations about their mate bond and the forever of it, but takes everything pretty darn well. Jordan on the other hand fights the connection at first. Once he realizes he doesn't want to fight it he turns all alpha male protective, puts his foot in his mouth a few times, but you can really see the love he has for Christa.

I found that there were a few slow parts in THIS WEAKNESS FOR YOU, but there is a pretty epic battle at the end that makes those slow points totally worth reading through. I don't think you HAVE to read PAST MY DEFENSES to enjoy THIS WEAKNESS FOR YOU, but there will be a few points you might not totally 'get' and book one is really good so I recommend reading it before umping in. I will be on the lookout for book three!