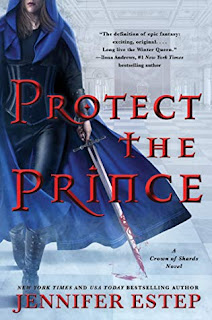 PROTECT THE PRINCE starts off just a few months after the events of KILL THE QUEEN. Everleigh is on the throne, but she has to fight to keep it at every moment. I enjoyed seeing Evie navigate her court and learn to be the ruler she wants to be versus the ruler her people expect.

As with book one, Evie can't catch a break and is tested at just about every turn. I didn't feel like there was much movement in the overall plot happening in book two, but I think the events were critical to Evie's growth as a person and as a ruler trying to secure her thrown for the long term.

The romance between Evie and Sullivan was a bit painful. It moves along, but it seems hopeless for most of the book which is super frustrating because they want to be together so bad and you FEEL it. You WANT it to work.

I really enjoy the secondary characters of this series. They are entertaining and I feel like I am invested in each of their stories. The world building continues to get better with each place we visit in Estep's world.

PROTECT THE PRINCE ended on a great note and I am looking forward to CRUSH THE KING.