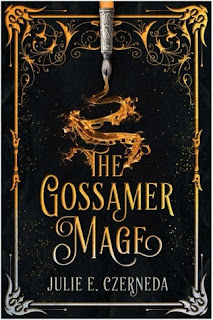 
From an Aurora Award-winning author comes a new fantasy epic in which one mage must stand against a Deathless Goddess who controls all magic.

Only in Tananen do people worship a single deity: the Deathless Goddess. Only in this small, forbidden realm are there those haunted by words of no language known to woman or man. The words are Her Gift, and they summon magic.

Mage scribes learn to write Her words as intentions: spells to make beasts or plants, designed to any purpose. If an intention is flawed, what the mage creates is a gossamer: a magical creature as wild and free as it is costly for the mage.

For Her Gift comes at a steep price. Each successful intention ages a mage until they dare no more. But her magic demands to be used; the Deathless Goddess will take her fee, and mages will die.

To end this terrible toll, the greatest mage in Tananen vows to find and destroy Her. He has yet to learn She is all that protects Tananen from what waits outside. And all that keeps magic alive.

Julie E. Czerneda is the author of the Species Imperative trilogy, the Night's Edge fantasy duology, and the Stratification novels. She is a multiple Aurora Award winner, and was a finalist for the John W. Campbell Award and the Philip K. Dick Award. Julie lives with her husband and two children in the lake country of central Ontario, under skies so clear they could take seeing the Milky Way for granted, but never do.

You could win the Julie E. Czerneda Library!

One lucky winner will received SIGNED copies of the following:


Enter now for your chance to win!
Posted by StacyUFI at 3:00 AM No comments: