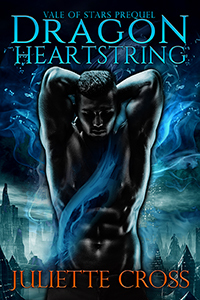 
Demetrius Cade has long since let go of his prejudice against Morgonkind, the dragon hybrid race his father taught him to hate. But what he never saw coming was the Morgon woman who would finally teach him to love.

Shakara Icewing has watched Demetrius Cade from afar for years. Known as the most eligible bachelor and emotionally unavailable in all of Gladium Province, she sees him as the aloof, arrogant brother of her dear friend. But when they finally meet, she isn’t sure she can handle how deep and how fast they both fall.

An old enemy resurfaces and once more threatens those Demetrius loves. When Shakara plans to speak before Parliament against business tycoon Aron Grayson, she puts her own life in the line of fire. Demetrius will stop at nothing to protect the woman he can no longer live without.


Demetrius wasn't the most likable guy when we first met him in SOULFIRE, but DRAGON HEARTSTRING makes it clear how much he has changed.

We know from previous books that a romance between a Morgan and human is never easy. The romance between Shakara and Demetrius doesn't happen in an instant, but their is instant chemistry and that is easy to work off of. I was surprised that Demetrius was the one that knew what he wanted and went after it and Shakara was the hesitant one that had to work through her feelings. I thought it would be the other way around. I enjoyed watching their chemistry and relationship grow.

Not only do we get to see Cade's change, but we get to see his Dad make huge strides in the right direction as well. If you have read the previous books in the Nightwing and Vale series, you know what a huge thing that is and it was really nice to see. Another thing I really enjoyed about DRAGON HEARTSTRING was that we find out what came of Aron Grayson from SOULFIRE—he so got what he deserved and still deserves worse.

I don't usually like going backwards in a series, but DRAGON HEARTSTRING was worth the blast to the past. It was nice to see the final Cade sibling find their Morgan match.