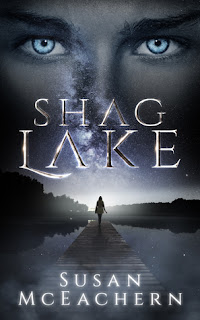 Geri McKenna hasn’t seen her brother’s best friend, Sean Eastman, since he graduated high school. Sean left their little town of Pembroke just hours after she nailed him with a kiss behind the shed, never to be seen or heard from again. No calls, no texts, no social media to stalk online.

Eight years after the awkward incident behind the shed, Geri and Sean meet again. She’s now an ambitious journalist working in a dead end job, and he’s a successful structural engineer working on a classified government project. For different reasons, they’re both interested in a woman who has gone missing amidst allegations of a Sasquatch encounter in the vicinity of Shag Lake. Geri is determined to get the scoop on the hottest story to hit the Internet, while Sean is determined to stop her.


I found SHAG LAKE to be an easy flowing, lighthearted, and uncomplicated read.

There were a few info dump moments in SHAG LAKE, but for the most part, it was easy to follow and easy to understand the different elements that make up the world the story takes place in. I'm not usually a huge fan of multiple POVs, but the author did a good job with both Geri and Sean's POV moments.

There is no word yet if SHAG LAKE will be part of a series, but I would read more.