I have the most supportive husband in the world.

Talking about writing with other writerly people and I love going to the movies.

Making stuff up of course, plus I love getting into my character’s heads.

I wouldn’t say that I follow certain routines but I need to have it quiet while I write. I’m not someone who can go to a coffee shop and write. I get distracted easily.

How would you pitch Her Black Wings, Book one of the Dark Amulet Series to someone who has not heard of it before?

It’s about learning to believe in yourself and finding redemption through second chances. The heroine wasn’t the best person in the world but at the end of her life she made the ultimate sacrifice to save someone’s life and earned a chance to redeem her soul. The hot angel sent to help doesn’t hurt either.

Can you tell us a little bit about the world that Her Black Wings, Book one of the Dark Amulet Series is set in?

The book is primarily set in the Detroit area. We also visit my interpretation on Heaven and Hell but I don’t call either place that. Hell is called Netherworld and it’s cavernous, hot and full of several types of demons. Some are half goat and half human looking and some have the heads of animals like bulls or rams. Heaven is called Arcadia and mainly it’s full of white sandstone buildings suspended by an unseen force. My characters have only shown me where the angels live, the place where humans go after their deaths is somewhere most angels aren’t allowed.

Do you have a favorite scene in Her Black Wings?

I have many favorites. This is one of them: meet cute

I wrote a romantic suspense with a serial killer. He was the hardest character to write, he wouldn’t cooperate. He ended up so boring, apart from the murdering, that I had to cut most of his scenes. I’m still resentful over it.

My favorite character is Amalya. She’s awesome because not only did she go toe to toe with her antagonists, she grew as a person and continues to surprise me. 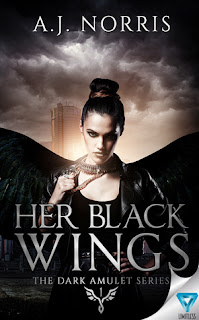 A former runaway turned criminal, Amalya is murdered and thrust into a treacherous world full of red-skinned, horned beasts under the control of the Demon Ruler, Abaddon, instead of enjoying peace and serenity like she hoped. But saving a young child from a certain brutal death in the last moments of her life has earned her a chance at salvation.

Elliott the Redeemer wants no part in saving another soul…

After one too many failures at redeeming lost souls, the nail-biting, self-pitying Elliott has had enough of his work and would prefer to live out his eternity on Earth drowning in bourbon. It doesn’t matter that Amalya has grown black feathered wings signifying the good that still dwells within her. He can’t risk failure again.

She has to prevent the now grown child she saved from committing murder or risk returning to Netherworld with Abaddon for good. She can’t do it alone, though. Amalya needs the help of the angel sent to guide her, but their emerging love might not be enough to convince Elliott she’s worth the risk.

Amalya loves her black wings. She knows she’s meant to be an angel—and she will stop at nothing to prove it…