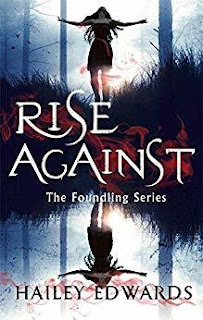 Welcome to the ferocious world of The Foundling, set in a bayou town where men are men - except when they are also dragons, kitties with wings, alligators and . . . well, Miller.
Apocalypse? It must be Tuesday
The four horsewomen of the apocalypse came to Earth - and only two survived. Now it's time for the real battle to begin . . .
Luce has come, literally, through hell, and now she's trying to pick up the pieces. Earth is getting ready for the war to end all wars: it's angels vs demons and Luce is the only one who seems worried about humanity, hapless pawns who are stuck in the middle of the battlefield. Between building an army and running for her life, she's got a lot on her plate - and that's not to mention her beloved Cole.
As angels drop dead and violent forces begin to gather in the city, the final pieces of an ancient war fall into place, and it's time for Luce and her loyal coterie to face an enemy like no other. In order to survive, they'll need to team up with those they've considered enemies, and try to decide who, if anyone, they can trust. And Luce must decide how much she's ready to risk in the name of peace - and whether she'd be prepared to sacrifice her very soul . . .
Discover why readers are OBSESSED with Hailey Edwards


DEATH KNELL wasn't my favorite installment of The Foundling series so I was a little worried that RISE AGAINST would fall along the same lines. I had nothing to be worried about.

Luce is continuing to learn about herself and her allies. I enjoy each and everyone on her team. I love the slow release of details, but am glad that by the end of RISE AGAINST it seems that Luce is finally in the know about all the things that have been kept from her and some revelations have cleared up some of the lingering questions I have had since book one.

Luce's relationship with Cole is finally strong. They are both on the same page and work really well together. We learned that they had a child (well, Cole and Conquest specifically) in DEATH KNELL and I wasn't really sure how I felt about it. I'm still not totally sure, but by the end of RISE AGAINST, I was more excited about it.

I totally loved the developments having to do with Rixton. I don't want to give anything away, but I was really excited about how that particular portion of the storyline played out in RISE AGAINST.

After I was done reading RISE AGAINST I only wanted to read more.