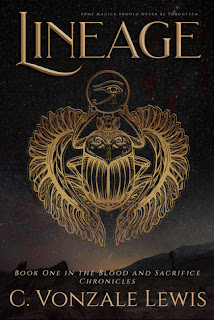 Smart-mouthed Nicole Fontane has a way of getting herself into trouble. She’s been fired from every job she’s had but still refuses to work in her father’s apothecary shop because of his practice of Earth Magick. On Tulare Island where Nicole grew up, Magick has always been a way of life—one she’s determined to avoid at all costs.

With less than two hundred dollars in the bank and rent due, Nicole is forced to take a job at Tribec Insurance as a last resort. Little does she realize, the moment she sets foot inside the building, she becomes a pawn. A sinister force has set its sights on her and will stop at nothing to use her in a sadistic game.

Tribec’s proprietors, the Stewart family, are curiously preoccupied with the Naqada, the mysterious pre-dynastic Egyptian society. Nicole finds it creepy, but on the bright side, the job reconnects her with her estranged friend, Marta. Yet the eerie atmosphere, disappearing Magick wards, and the smell of blood inside Tribec bring Nicole to a startling conclusion—the Stewarts are practicing Blood Magick, the deadliest of the Five Principles. By the time Nicole uncovers the truth, Marta and her four children have gone missing, and all signs implicate the Stewarts and an archaic blood ritual to an Old One, a Naqada god imprisoned on Tulare Island.

Battling the evil of Blood Magick will demand Nicole to confront a hidden past and unlock the Magick buried within. But can she set aside her deep-rooted fears to work with a team of vigilante Mages? Or will the clock run out on Marta and her children—and on Nicole? 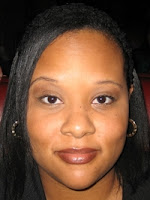 My name is Carla Vonzale Lewis and I like my martini’s shaken…never stirred. I was born in Georgia but please don’t mistaken me for a Georgia peach. I’m more like a prickly pear. Speaking of being born, someone asked me recently if I remember my birth. And I have to say, yes, I do remember that handsy doctor pulling me out into the cold. Right Bastard!!!

Despite being born in the South, I grew up in the North. California to be exact. Every once in a great while we get to experience all four seasons. But mostly, it’s just heat. You should see our electric bill in the summer! I like the beaches, but not the sand. I enjoy being outside, but the sun gets on my nerves. Does it really need to send its death ray to a single spot on my skin! (I told you I was a prickly pear) And don’t get me started on the traffic.

The first part of my life, I worked in customer service. This line of work led to the discovery of my favorite drink, or, rather, several favorite drinks. I could list the many concoction but that would go on forever!

Needless to say, it wasn’t an easy job. But I did enjoy talking with people. And when it came time to develop my characters, I drew on those experiences.

I have a degree in Fashion Design. Don’t ask. The only thing I gained from those wasted two years of my life, is being introduced to the love of my life, Bobby. He is truly my rock.

Why do I write? Well my first book, LINEAGE, answered the question, “What does the big boss actually do all day?” I might have gone a little dark with my answer, but it was fun answering the question. But mainly, I love writing because it gives me power to create. And it also gives me the power to fix this broken world.

Truthfully, I’ve always loved the written word and the way a good book could take you to another place and time. Instead of hanging out in the lunchroom, I would go to the library and create stories or bury my head in a really good book.

I started writing my first novel in 2014 and 30 days later I had a collection of scenes that needed some serious revision. And that was where the fun came in. Over the course of several years my novel went through final draft after final draft until I finally came to…you guessed it, the final draft.

When I’m not writing, I enjoy reading, binge watching shows on Netflix, and trying to convince my husband that getting a dog is a wonderful idea.

And one day, I will discover how many licks it actually takes to get to the center of a tootsie pop.