UFI welcomes Matthew J. Metzger Author of Enough. Thanks for Joining us!!

This or That Interview
Character: Ezra Pryce of Enough. Ezra is a full-time teacher, most-of-the-time boyfriend, and not-any-more Catholic. It can be a toss up which is more challenging - dealing with his boyfriend's demons, or his students' ferocity.

Demons. Angels are a false ideal - and in any case, my partner isn't one and I wouldn't trade him in for one regardless of that. So angels can't be all that good, can they? Whereas demons are more variable - and can be overcome, if you try hard enough.

Oh, neither! A shifter would scare the cats, and my boyfriend would probably get jealous if I showed an interest in anything too tall, dark and mysterious. But if forced, I would vote shifter. Purely because no shifter story as yet has made the girls in my classes bring in glitter to throw at the boys. Makes a right mess of the lab.

Left. The Latin is sinistra, and there's something a little appealing about living up to being as sinister as your sister thinks you are for being gay, isn't there?

Depends entirely on what we're doing up or down, doesn't it?

Pasta. Pizza is only every once in a while, and pasta's better for you. You don't stay athletic and flexible by having a loyalty bonus at the local Domino's Pizza restaurant!

Coffee in the morning and at work, tea in the evening. And mugs of tea to keep Jesse sweet. Man's addicted, I swear.

Either, neither. I'm not bothered, as long as it's diet. And as long as Jesse hasn't gotten his hands on it and spiked it with vodka. He gets ideas when I get drunk, you see.

Oh, definitely adult. I'm a secondary school teacher - I see quite enough of teenagers at work without reading about them at home.

For a time, the school I work at had a metal detector to prevent the little darlings bringing knives to school. Do I vote knives because they can kill less people with a knife, or guns because they're less likely to have one? In truth, I wouldn't pick either of these. The kids already think they're hard, they don't need to be handed weapons and start challenging each other to prove it!

I'm a chemistry teacher, so my reading material would probably bore most people to death, but it is reading. I've never been a writer of any kind. Setting fire to grass and causing explosions was more my thing growing up, and I pursued a career which encourages it. It's probably just as well that I'm dating a firefighter.

Matthew J. Metzger is the front for a twenty-three-year-old British author writing on the side of a demanding day job, and not wishing to be fully out of the closet just yet. Matthew is as much a creation as the characters in his books, and was invented in time for the release of his debut young adult novel, Our Last Summer.

Since then, Matthew has contracted four more novels in the gay romance and young adult genres, with his work focusing on the grittier contemporary issues such as disability, illness, mental health, domestic violence and conflict in relationships. His trilogy on music and depression, beginning with Vivaldi in the Dark in December 2013, has been billed as both heartbreaking and intense. His fifth novel, published here at Breathless Press, is by far the most light-hearted so far.

When he's not writing, Matthew is sleeping or working. Most of his time is spent thinking about writing or actually doing it. He can be stalked on Twitter and Facebook, as well as his Wordpress blog, and welcomes contact from readers and fellow authors alike.
__________________________________ 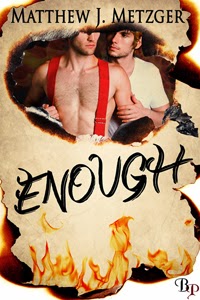 
Jesse can do the math: Ezra's perfect, he isn't, and this relationship is doomed. Until the accident forces Jesse to recalculate.

Jesse has never had a real boyfriend before. He's a firefighter, and that's all that anyone's seen before—a quick and thrilling screw, and a story for the future. So when he lands Ezra Pryce, the most beautiful man in the whole of Brighton, Jesse can't quite understand why Ezra is still here eight months down the line.

Not that he's going to complain. Ezra's sexy, sarcastic, and doesn't treat Jesse like he's stupid, but Jesse can do the math. Ezra is nothing short of perfection; and Jesse falls a very way short of it. Jesse isn't going to be enough for someone like Ezra in the long run, and he is living—and loving—on borrowed time. When a disastrous weekend in Norwich introduces Jesse to the staunch disapproval of Ezra's family and the six-pack of his ex-boyfriend in one fell swoop, Jesse's fate is sealed. He cannot hope to live up to an ex who has every intention of getting Ezra back, and all the looks and charm to do it too. Jesse is not enough for Ezra and he's never going to be.


Jackie's was a loud cross between a bar and a club, with a sticky dance floor populated by both straight and gay couples, and a tiny LGBTQ flag above the bar with a sign declaring it to be a "safe space." Jesse had no idea what that meant, but he grasped that it was okay to be gay in here, and slid an arm around Ezra's waist at the bar.

"You're clingy," Ezra said lightly, but tucked his head briefly against Jesse's neck in a kind of half-hug pose. "You okay?"

"Yeah," Jesse said, and slapped Ezra's hand down. "I'll get this round. I want you to get tipsy, and you'll never do that if you stick to your bloody lager."
"Mr. Dawkins, are you trying to get me drunk?"

"Yes," Jesse said, handing over a twenty to the bored bartender. In the pause as the guy wrestled with the till, he twisted to kiss Ezra soundly, transmitting his exact intentions with his tongue and his hand possessively low on Ezra's hip.

"Mm," Ezra hummed as he pulled back, and his eyes were just a little darker. "Maybe I'll get a little bit drunk."

"You do that," Jesse said, and pressed the glass into his hand.

Jackie's livened up a little as the bar slowly filled and the money kept changing hands. Jesse kept Ezra on the vodka, relishing the chance to be able to get him drunk. Ezra didn't like to get drunk if Jesse couldn't, and Jesse often couldn't drink because of the risk of being called to an emergency at work, so it was nice to get to let go a little, to drink a bit more than the two-pint maximum, to feel the first fuzzy edges of poor coordination and disjointed thinking take over his brain. The music was kind of shitty – late nineties stuff he hadn't heard in years – and the bartender was stingy with the doubles, but it was fairly cheap and it was nasty enough to work, and when that wide, beautiful smile bloomed across Ezra's face when a tiny little lesbian and her girlfriend dragged him to dance with them, insisting they knew him as insistently as he said that they didn't, Jesse felt happy. Despite Mrs. Pryce, despite Audrey Hepburn being a lesbian, despite the crucifix on the gatepost, he felt happy.

He drained his glass and went to the bathroom, relieving himself clumsily in a definitely nasty bathroom with the telltale streaks of sticky white powder on the counter that said that at least one part of the sex, drugs and rock and roll was going down in here on your average evening. Rinsing his hands off, he wondered if another round was called for, or another bar. Obviously they'd keep going a bit longer. He could still think, for one. And thinking was counterproductive for later, when he'd get Ezra's long legs wrapped around his waist and try and suck all the alcohol back out through his mouth. Or his neck. Or other places.

Then he left the bathroom, and saw him.

Ezra had escaped the tiny lesbians, and was leaning very precariously against the bar, a fresh drink in hand, and smiling—beaming—at a man who was just offensively good-looking. He looked like one of those underwear models or something. Tall in a too-tight-T-shirt, with spiky dark hair in a style that could have been achieved with an electric razor but he'd probably paid fifty quid for at a salon aimed at women. A waxed chest, judging by the naked v of skin that was visible below his neck. He was flashing a chiseled, perfect, cologne-ad smile at Ezra. People could model cologne and underwear, right? Because this guy definitely did.

Jesse hesitated at the bathroom door, and felt a shaky warmth bubbling up in his stomach as the underwear model reached into his back pocket and passed Ezra a thin bit of card. His number, maybe? Why the hell was some underwear-cologne model giving Ezra his number?

Why the hell was Ezra putting it in his pocket?

Ezra turned from the bar, eyes scanning the room, and that placid, drink-smudged smile widened when he locked eyes with Jesse. He leaned back against the sticky wood, weight on his elbows, and beckoned with one long finger, and it was like an invisible rope reeling Jesse in. The underwear model glanced Jesse's way and melted back into the crowd on the dance floor and Jesse's anger went with him. He planted his hands on either side of Ezra's waist, bracing himself against the bar, and crowded Ezra against it to kiss him and taste the drunken want on his tongue.

"You ran away," Ezra accused, tugging on Jesse's hair lightly.

"You started talking to other guys," Jesse murmured, and yet with Ezra's hand playing with his ear and the wide, blissfully peaceful expression he wore when he was drunk, it somehow didn't matter.

"Only because you ran away," Ezra teased, and bumped his nose against Jesse's clumsily.

"Can we go?" Jesse whispered, dropping a hand to slide it around Ezra's hip and down to the top of his leg, rubbing against the denim of his jeans lightly. "Back to the hotel? I have designs."

"On you and the bed and being bendy."

Ezra grinned, and downed the rest of his glass in one expert motion, his back and neck flexing like liquid in suspension. "I knew you got me drunk," he accused, and Jesse laughed, putting a hand into Ezra's back pocket to hook him in and guide him out. The night air was cold after the heat of the bar, and the underwear model had vanished like an ugly, sexy mirage.

"You shouldn't talk to underwear models," he blurted out, and Ezra laughed too loudly in the street.
"I only talk to your underwear," he retorted, and then all the sense of it was slipping away, and Jesse simply forgot in favor of other things.