Review: Eye of the Tempest by Nicole Peeler 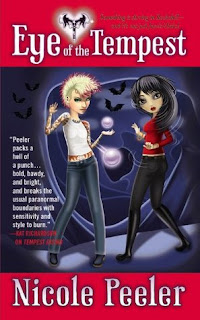 
Nothing says "home" like being attacked by humans with very large guns, as Jane and Anyan discover when they arrive in Rockabill. These are professionals, brought into kill, and they bring Anyan down before either Jane or the barghest can react. Seeing Anyan fall awakens a terrible power within Jane, and she nearly destroys herself taking out their attackers.
Jane wakes, weeks later, to discover that she's not the only thing that's been stirring. Something underneath Rockabill is coming to life: something ancient, something powerful, and something that just might destroy the world.

Jane and her friends must act, striking out on a quest that only Jane can finish. For whatever lurks beneath the Old Sow must be stopped...and Jane's just the halfling for the job.

I could not put down EYE OF THE TEMPEST. There is non stop action, fantastic kick butt characters, tons of sexual frustration, laugh out loud commentary and some great surprises thrown in to make what I feel is the best Jane True novel yet. Jane has really grown into the supernatural world and herself. She gets some more answers and finds a new ally in her fight to protect. Her and Anyan are attempting to start up a relationship that has been forming for a while, and I'm super excited about it. I have always liked Anyan and hope book 5 has a lot of him in it. I wasn't sure how I felt about Blondie at the beginning but she really brings something new and fresh to the series. She turns out to be extremely loyal and I think Jane has a friend that will stand by her side through anything in her. The war is officially on and I will be there every step of the way. Cant wait for TEMPEST'S FURY in 2012.