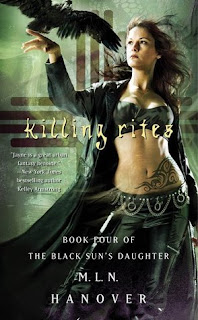 Jayné Heller has discovered the source of her uncanny powers; something else is living inside her body. She's possessed. Of all her companions, she can only bring herself to confide in Ex, the former priest. They seek help from his old teacher and the circle of friends he left behind, hoping to cleanse Jayné before the parasite in her becomes too powerful. Ex's history and a new enemy combine to leave Jayné alone and on the run. Her friends, thinking that the rider with her has taken the reins, try to hunt her down, unaware of the danger they're putting her in. Jayné must defeat the weight of the past and the murderous intent of another rider, and her only allies are a rogue vampire she once helped free and the nameless thing hiding inside her skin.


Answers we finally have answers. If you are anything like me you have been dying right along with Jayné from book one trying to figure out who and what she really is. The time has finally come that we have answers. KILLING RITES starts off a little bit after the events of VICIOUS GRACE.  Jayné is beating herself up for the role she played in Chicago and is determined to find out who she really is and what exactly is sharing her body.


Ex ends up bringing Jayné to some old colleagues and things stack up to send Jayné on the run by herself to prove that she isn't being controlled by her rider. Although I love the whole cast of supporting characters, I actually ended up really enjoying seeing Jayné take care of things on her own. She really takes control of the situation she is in to take care of not only herself but her friends too. Ex plays a much bigger role in book 4 than anyone else. Aubrey and Kim are off trying to make their relationship work after they find out exactly what Jayné's uncle did to tear them apart. Chogyi Jake is off recovering as well as being pushed away by Jayné because she doesn't want to drag him into another possible place where he could get hurt. I missed having him around for the first half of the story but he did end up coming in towards the end and is back in the mix. Ex really is the only one there with Jayné and they end up getting pretty close. She starts seeing him through different eyes and starts thinking about possibilities. I think they could do great things together relationship wise so I'm hoping this develops more.

KILLING RITES was filled with inner struggles, hard choices and answers. It ended up being a tad bit slower then previous books but I think that it was pretty important information wise. There was still plenty of action and rider drama. The answers wont stop here though there is still plenty to learn and it looks like Jayné will be going home to look for them.

Immortal Rider (Lords of Deliverance, #2) by Larissa Ione
Feel free to add anything you see missing or let me know if there is a mistake in the comments. Happy Reading =)
Posted by StacyUFI at 2:59 AM No comments: