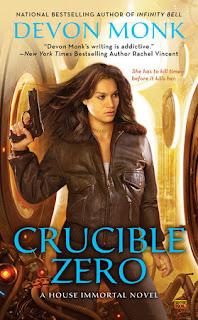 
Matilda Case never thought of herself as a hero. But because she is galvanized—and nearly immortal in her stitched, endlessly healing body—she doesn’t have much of a choice. Even if she doesn’t want to save the world, she’s the only one capable of traveling in time to do so.

But her rescue attempt hasn’t gone as planned. She’s stuck in an alternate universe, and her world is in danger of disappearing. Worst of all, an unfathomably powerful man who can also travel through history doesn’t want her to put things to rights. He’s willing to wage bloody war to stop Matilda, unless she surrenders control of time to him.

Now, with the minutes ticking, Matilda must make impossible decisions, knowing that one wrong choice will destroy her—and any chance of saving everything she loves...


Matilda finds herself in a different timeway with all of her loved ones alive and well, but not exactly how she remembers them. She quickly realizes that she can deal with the changes as long as she stops Slater from destroying them all.

CRUCIBLE ZERO brings us back to the House Immortal series and wastes no time picking up where INFINITY BELL left us with its cliffhanger.  It was a bit weird seeing how alike and different all of our favorite characters were in the new timeway, but I quickly feel in love with their new counterparts. The world also has a lot of changes to it and Monk did a great job of building it up for us.

I missed the closeness between Abraham and Matilda as she was trying to figure him out again. It did help that Abraham, though different, was still very drawn to Matilda and therefor was very open to a relationship. Still Matilda took a while to give in to her feelings so I missed their easy relationship from INFINITY BELL.

With it's many fight scenes and interesting twists and turns, book 3 lived up to the previous books in the House Immortal series. CRUCIBLE  ZERO did a great job proving that happily ever afters can come in very unusual, but interesting ways. Bravo Ms. Monk, another great series!