Thank you to everyone that entered!!
PRIZE: One copy of Dreamland

Congrats!! I have emailed winner who has 48 hours to respond with mailing address or I will pick another.
Posted by StacyUFI at 10:26 PM 1 comment: 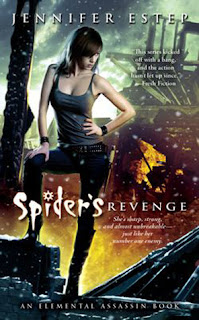 
Old habits die hard for assassins.
And I plan on murdering someone before the night is through.

Killing used to be my regular gig, after all. Gin Blanco, aka the Spider, assassin-for-hire. And I was very, very good at it. Now, I’m ready to make the one hit that truly matters: Mab Monroe, the dangerous Fire elemental who murdered my family when I was thirteen. Oh, I don’t think the mission will be easy, but turns out it’s a bit more problematic than expected. The bitch knows I’m coming for her. So now I’m up against the army of lethal bounty hunters Mab hired to track me down. She also put a price on my baby sister’s head. Keeping Bria safe is my first priority. Taking Mab out is a close second. Good thing I’ve got my powerful Ice and Stone magic—and my irresistible lover, Owen Grayson—to watch my back. This battle has been years in the making, and there’s a good chance I won’t survive. But if I’m going down, then Mab’s coming with me . . . no matter what I have to do to make that happen.

**WARNING CONTAINS PREVIOUS BOOK SPOILERS.. READ AT YOUR OWN RISK**
What can I really say about Jennifer Estep's Gin Blanco series that I have not already said? I love this series. It was one of the very first series I picked up when I first started reading and I was hooked form the very first chapter of SPIDER'S BITE. Whenever someone asks me what UF character I would love to be or who i would love to have as a best friend I have always said Gin Blanco. If you have not yet read the previous books in this series I would not suggest jumping in at SPIDER'S REVENGE even though some say you can read it as a standalone.  There is way to much back story and character/world development that you would end up missing out on some of the best scenes and experiences so far. Having said that I also recommend you stop reading my review as there will be spoilers for previous books mentioned.

WOOT its finally here, the final showdown with Mab Monroe. I cant even begin to tell you how excited I was to get a copy of SPIDER'S REVENGE so that I could jump in and see what would happen.  For me it was pretty much a given that Gin would defeat Mab but the way its done and everything that Gin and her friends have to go through was a roller coaster of emotions and events. There is a ton of action as you can imagine, more then one attempt to get the job done, allies in the most unlikely places and emotions displayed you never thought you would see out of Gin.  I never guessed who would do what, I never saw what was coming, every twist and turn had me on the edge of my seat trying to see around the corner. Owen and Gin are perfect for each other I'm so glad that he is part of the series now, I cant picture him not in her life (If Donovan comes back and ruins this I will boycott... ok not really but I would be VERY dissapointed ) With Mab gone I can not even begin to guess what will happen next. The whole storyline of the last 5 books is tied up with a nice bow and I am on the edge of my seat waiting to see what could possibly beat what has already happened. I have said it before and I will say it a hundred more times to anyone that asks for an Urban Fantasy recommendation, You MUST pick up Jennifer Estep's Elemental Assassins series. BY A THREAD comes out February 2012 and I will be first in line.

I got an invitation to use Raffle Copter and need opinions on weather to use it or not.

Since you all are the ones that enter what would be the easiest for you? If we do Raffle copter there still might be commenting involved as authors sometimes like us to ask questions so keep that in mind.
Posted by StacyUFI at 2:33 AM 11 comments: