Review: The Offering by Kimberly Dering 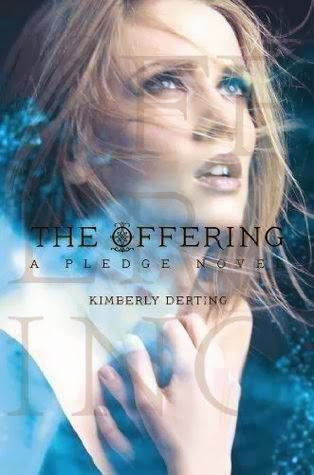 
True love—and world war—is at stake in the conclusion to The Pledge trilogy, a dark and romantic blend of dystopia and fantasy.
Charlie, otherwise known as Queen Charlaina of Ludania, has become comfortable as a leader and a ruler. She’s done admirable work to restore Ludania’s broken communications systems with other Queendoms, and she’s mastered the art of ignoring Sabara, the evil former queen whose Essence is alive within Charlie. Or so she thinks.

When the negotiation of a peace agreement with the Queendom of Astonia goes awry, Charlie receives a brutal message that threatens Ludania, and it seems her only option is to sacrifice herself in exchange for Ludanian freedom.

But things aren’t always as they seem. Charlie is walking into a trap—one set by Sabara, who is determined to reclaim the Queendoms at any cost.


This series has beautiful covers! THE OFFERING is the third and last installment of The Pledge series. We have watched Charlie go from a resident of the vendor sector to Queen. We have watched her fall in love. We have watched her struggle and try to find her way with Sabara hitching a ride in her body. We have witnessed the loyalty of her family, friends and allies as well as their struggles alongside their Queen. THE OFFERING brings everything to a close and gave me an ending that left me satisfied and excited about the future of Ludania.

There's no doubt that Charlie has been through a lot. Watching her grow and evolve into the Queen she is in THE OFFERING was equally hard and joyous. The care that she has for Ludania and the Ludanian people is first in her mind and the willingness to do anything to free them shows a lot about the person she has become. The only book in the series that we get a lot of Charlie/Max time was THE PLEDGE but you can see how much they have grown as a couple and the love they share along the way. I would have liked to see more of them together in THE OFFERING but there were bigger issues to deal with. There has been a rift in some of Charlies relationships and it was nice to see those play out. The supporting characters of the series were as much of a part of my enjoyment from the beginning as the story itself.

There were a few parts in the series that I could have done without, a few parts in THE OFFERING that were a bit slow but overall I really enjoyed it. I am looking forward to seeing what Kimberly Derting will do next!