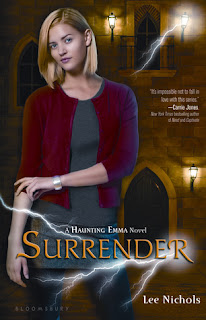 After a devastating battle at headquarters in New York, the ghostkeeping world is in shambles. When Emma and Bennett return home, they are determined to defeat the wraithmaster, Neos, forever. But it's not going to be easy. Bennett's parents kick him out when they realize he is still using drugs to enhance his powers. Emma is convinced her aunt has come back from the dead to warn her of a new threat. And worst of all, Neos is using wraiths to possess the students at Thatcher Academy.

If the ghosts manage to take over the entire school, even Emma won't be strong enough to stop them. But if either she or Bennett sacrifice his or her powers, they might be able to save the ghostkeeping world once and for all-and break the "ghostkeepers lose their powers when they fall in love" curse. The question is: who will be the one to surrender all power?

Fast-paced and romantic, this conclusion to the Haunting Emma trilogy will thrill readers as it brings the ghostly mystery to a close.

SURRENDER is the conclusion to The Haunting Emma Trilogy. Emma started the series thinking she was normal not knowing anything about her powers or the world that she was born into. Throughout DECEPTION and BETRAYAL She has grown into a powerful Ghostkeeper. She has had loyal friends and family behind her, has lost people she cared about and has fought on the side of good.

Emma has been a great strong character throughout the series. She was easy to follow along with and connect to. Emma grew into herself through all the things that were thrown at her and came out ahead even when the odds were against her. Bennett and Emma's relationship has taken the long route but in SURRENDER their emotions and struggles as they fought for each other came through the pages and made the ending of the story that much better.

While SURRENDER did a great job building up suspense and mystery and had some great action thrown into the mix I felt the conclusion of the battles with Neos left me lacking the sense of satisfaction I would have liked to see with its conclusion. The Haunting Emma series was still a great series and I would recommend it to any YA ghost lover.