UFI welcomes  Kelly Hashway Author of Touch of Death. Thanks for Joining us!!

I openly admit to being weird. I like to embarrass myself because I think life is just more fun if you aren’t afraid to do something silly.

Playing with my five-year-old daughter. She keeps me laughing.

Being able to admit that I hear voices in my head and it’s a good thing. ;) Meeting new characters and getting to tell their stories is a great feeling.

Monday through Friday, I write from 9am-2:45pm when my daughter is in school. I get my blanket and curl up in my chair, where I don’t really move until I have to pick up my daughter. I even eat lunch at my computer.

Rick Riordan’s Percy Jackson series is one of my favorites. I could read it over and over again. I also love Becca Fitzpatrick’s Hush, Hush series.

How would you pitch Touch of Death to someone who has not heard of it before?

For Jodi Marshall, finding out she’s the Chosen One isn’t necessarily a good thing. While she has the power to bring the dead back to life and protect a race of necromancers called the Ophi, she’s also deadly to humans and has Hades breathing down her neck. She’ll quickly learn that power comes with a price.

Can you tell us a little bit about the world that Touch of Death is set in?

Touch of Death is set in an unnamed town in Pennsylvania. The story sit split between the town where Jodi lives and the school where the Ophi go to train. While on the outside, the world looks much like our own, the Greek gods are still very much present, as is Medusa’s spirit, which is trapped in a statue at the Ophi school.

Do you have a favorite scene in Touch of Death?

Yes, the climax. I wasn’t expecting it. I was writing it, and realized it was going in a completely different direction than I thought. It shocked me, but in a good way. I needed that to happen. It was a case of my characters knowing what was best for them and me just getting out of their way.

Which character was your favorite to write about? What about the hardest to write about?
Jodi and Alex were almost a toss up. I love both of them. Alex actually has a back story that I’m dying to tell. There is such much to his character, and you only see some of it in Touch of Death. Jodi is a great character because while she’s extremely powerful, she’s not sure she wants that power.
The hardest to write was probably Abby. I worked on her a lot, and she changed during revisions. She’s evil but she has a reason for it, and she really grew on me. I kind of love to hate her.

LOVE ALL, the first novella in the Game. Set. Match. Heatbreak series releases through Swoon Romance, January 2013.
STALKED BY DEATH, the second book in the Touch of Death trilogy releases through Spencer Hill Press, July 23, 2013.
THE MONSTER WITHIN, a YA paranormal about a girl who was brought back from the dead and used as a pawn in a deadly war among witches, releases through Spencer Hill Press, April 2014 with the sequel, THE DARKNESS WITHIN, following sometime after.
INTO THE FIRE, is the first book in the Birth of the Phoenix series releasing through Month9Books, Spring 2014.
CURSE OF THE GRANVILLE FORTUNE, is a middle grade fantasy series releasing through Month9Books, 2016.

Thanks for having me! 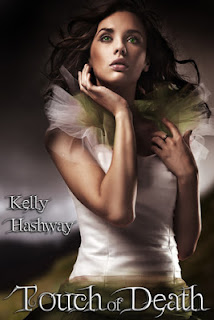 
Jodi Marshall isn’t sure how she went from normal teenager to walking disaster. One minute she’s in her junior year of high school, spending time with her amazing boyfriend and her best friend. The next she’s being stalked by some guy no one seems to know.

Jodi’s deadly to the living and even more deadly to the deceased. She has to leave her old, normal life behind before she hurts the people she loves. As if that isn’t difficult enough, Jodi discovers she’s the chosen one who has to save the rest of her kind from perishing at the hands of Hades. If she can’t figure out how to control her power, history will repeat itself, and her race will become extinct.